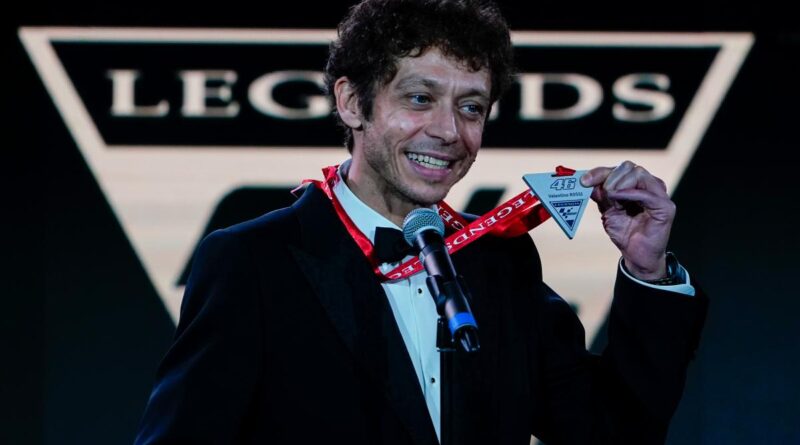 Nine-time World Champion Valentino Rossi was officially named a MotoGP Legend after ending his career at the Valencia GP, which took place at the Ricardo Tormo Circuit, this past Sunday (14).

The Italian was inducted into the MotoGP Hall of Fame and was surprised with the honor at the FIM MotoGP Awards Ceremony, which took place after the race, with the award presented on stage by Dorna CEO Carmelo Ezpeleta.

One of the greatest riders of all time, Rossi has competed for 26 seasons, won nine World Championships, and scored 115 victories and 235 podiums in all classes.

The tributes on social media to this legend of the motorcycling world were made using the tag #GrazieVale with world celebrities leaving their messages.

Valentino Rossi, MotoGP Legend: “I always think of this day like a nightmare, because it’s the end of the a long career and I thought it would be in Valencia but in the end I enjoyed it a lot so I have to thank everyone, everyone who has worked with me, the whole paddock, the other riders… it was an unforgettable day and I enjoyed it. It was a long career, and always a pleasure.”

Carmelo Ezpeleta, CEO of Dorna Sports: “The only thing I can say to Vale is thank you very much. It’s been amazing since 1997 in Malaysia, we saw a guy doing fantastic races but also very special for so many reasons. We started to talk with him then and since that time, everything we’ve done together, with everyone who works in MotoGP, it’s been amazing.

“First of all Valentino has been an incredible rider, even yesterday, at 42, he was within tenths of Fabio. But also his personality, the situation he’s helped us to create, the Safety Commission, it’s something very special. These are all the words I can say. Grazie, Valentino!”