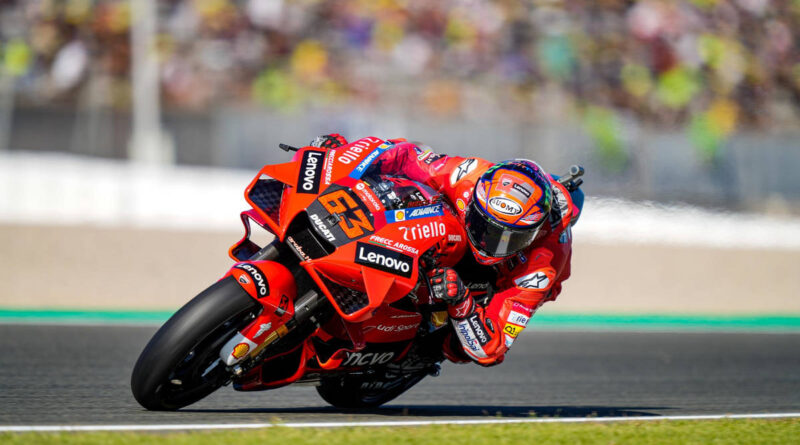 Ducati Lenovo Team MotoGP rider Francesco Bagnaia, won the Valencia GP this Sunday and gave the Team’s title to Ducati. It was his fourth win of the season, with the entire podium for Ducati, as rookie Jorge Martin (Pramac Racing) finished second and Jack Miller (Ducati Lenovo Team) finished third.

It was a very emotional Sunday at the Ricardo Tormo circuit, as it was the farewell race for nine-time World Champion Valentino Rossi, who managed to finish 10th. Danilo Petrucci also said goodbye to the top category of motorcycling in the world.

Bagnaia had a private fight with Martin, but remained a good part of the race behind the rookie. Only after half the race the Italian managed to overtake in order not to lose more.

His teammate Miller lost some positions after the start, but managed to recover at the end and finished in third position. He came to threaten Martin’s position, but in the final laps, he couldn’t get close enough to try to overtake.

With that, Ducati locked the entire podium, with two riders from the official team and one from the satellite, the first time they have achieved this in MotoGP.

Team Suzuki Ecstar started the race with everything, placing its two riders in the top four. Joan Mir took advantage of the start and took second place, putting pressure on Martin. But Bagnaia was driving a lot, and managed to take the position after a few laps.

Mir lost performance, and lost third to his teammate Alex Rins who, after passing him, put a lot of pressure on Bagnaia. He even tried to overtake but couldn’t sustain. Risking too much, he crashed and abandoned.

Valentino Rossi (Petronas Yamaha SRT), doing the last race of his career, managed to finish 10th, his same starting position. At first, he managed to take eighth place momentarily, but struggled to keep it, being passed by Johann Zarco (Pramac Racing) and Enea Bastianini (Avintia Esponsorama).

Anyway, it was a good farewell position, and one that left him very emotional after the checkered flag. The Italian was embraced by several riders still on the track, and received a party when he returned to the pits, including from the other teams.

On social networks, ‘The Doctor’ received tributes and thanks through the tag #GrazieVale. On the Ricardo Tormo circuit, a huge panel with his face was painted by an artist and signed by the Italian.

The winner of the race (Bagnaia) dedicated the victory to his ‘master’, Valentino Rossi, thanking him for everything he did, as a rider and at the VR46 academy. Big names in the sport left their messages, among them Lewis Hamilton, Rafael Nadal, Roger Federer, Ronaldo Nazário (O Fenômeno), among others.

Anyway, 2021 is over and we will no longer have Rossi and Petrucci on the MotoGP tracks. But 2022 and beyond promise even more. We will have the return of Marc Marquez and Pol Espargaro, we wait for the physical improvement of Franco Morbidelli, Fabio Quartararo will defend his title, and we will have new talents.

Let the new season come and thank you Vale! (#GrazieVale).