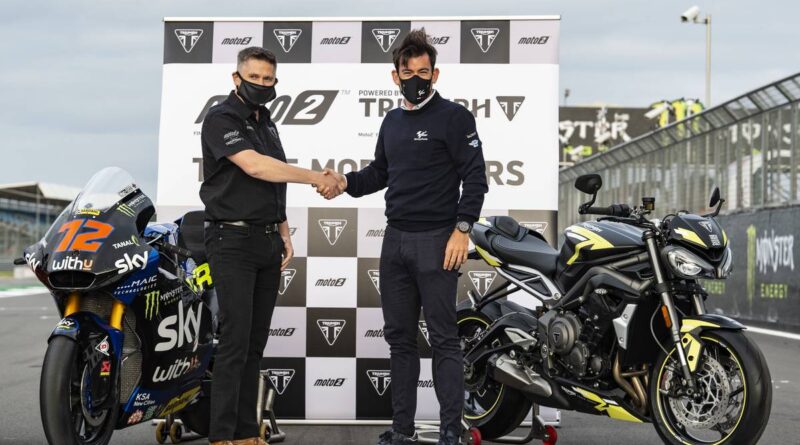 Triumph Motorcycles will continue to exclusively supply its record-breaking 765cc three-cylinder engines to the FIM Moto2 World Championship for three more seasons, from 2022 to 2024.

Since the start of the 2019 season, Triumph has been supplying them all the teams in this category have their 765cc triple engines, tuned for competition tracks, but based on the segment-leading Street Triple RS engine.

With important technological developments, this engine offers more power to riders and is able to offer a peak power of more than 140 hp – which represents an increase of more than 17% over the original engine that equips the street motorcycle sold for the consumers. This 765cc engine brought the Moto2 a very welcome boost in power, transforming performance and the level of competition.

Following Dorna’s (competition promoter) intention to bring the Moto2 category closer to MotoGP, the increases in power and torque, combined with a more advanced electronic package, provided a more relevant training and development ground, while improving the race in general in its own right.

Over the past two years, Moto2 competitors have achieved podiums and victories in their first seasons in the MotoGP standout class: Alex Márquez, Moto2 World Champion from 2019, took two second places in 2020, with title rival Brad Binder having a victory also in 2020 and more recently in Austria in 2021.

Jorge Martin took his first Moto2 victory in 2020, followed a year later by his first MotoGP victory and two more podiums in 2021. These incredible results prove like Moto2 became the natural springboard for MotoGP that Dorna envisioned.

Redefining the category, successive records began to be broken. In addition to 14 different race winners since 2019, there have been lap records in 34 events, including records that have been broken and broken again year after year, plus the first top speed of 300 km/h for a Moto2 machine. The record stands at 301.8 km/h at Phillip Island, Australia.

Reflecting on these great successes, the wonderful feedback and partnerships that Triumph has developed with the drivers and their teams, and the incredible response from Triumph fans around the world, the British manufacturer, in partnership with Dorna and with ongoing support from Externpro (company responsible for the maintenance of the Moto2 engine), decided to extend this relationship and sign a new contract for another three years of competition.

“Moto2 has been the perfect environment to demonstrate and prove the reliability and performance advantages of our triple engines, with the top 20 qualifying times consistently occurring within a second of each other. This not only raised our profile and credibility on the world stage, but for me the success of Moto2 was also an incredible catalyst, rekindling the passion for racing in Triumph bikes. I am delighted to have played a role in this landmark activity for Triumph and excited to see the extension for three more seasons. We are committed to providing further improvements to engine performance that are sure to be appreciated by both riders and teams,” said Steve Sargent, Product Director at Triumph Motorcycles.

“Our first few years together were a wonderful success and I would like to thank Triumph for their help and hard work throughout those first three years – especially during the pandemic. The FIM, IRTA and Dorna are happy with the results this project has shown, validating the consistency of the steps between Moto3, Moto2 and MotoGP. Overall, we are pleased with the partnership and look forward to another three exciting years together,” said Carlos Ezpeleta, Dorna’s Managing Director for Sports.