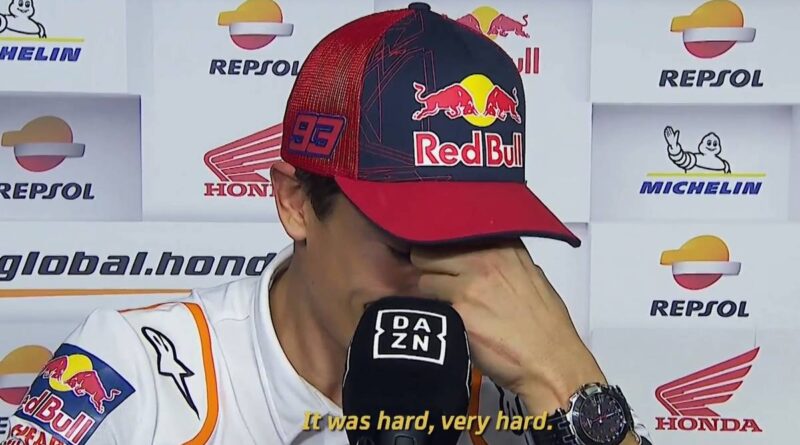 Marc Marquez, Repsol Honda Team rider in MotoGP, expressing a lot of emotion, broke down in tears, after the race in Portugal, when he finished in seventh position.

He was been interviewed by the DAZN Spain channel, when he was unable to hold his emotions and just cried (watch the video on the MotoGP website at the link below).

Marquez said that he usually does not express these deep emotions, that he prefers to leave it inside. But this time, he did not succeed, it was a lot of emotion, the result of 9 months of pain and recovery, along with the doubt of whether he would be able to run and be competitive again.

The Spaniard made an excellent return, as he showed good pace in free practice, had to compete in Q1, went to Q2 together with Joan Mir (Team Suzuki Ecstar), qualified for the race in sixth and finished Sunday in seventh position, practically without strength.

In an interview, he said that the start of the race was like being at school, along with other bigger and stronger kids, and not knowing what he would be doing there, because “everyone” was overtaking him. But he managed to find his rhythm, and just rode (enjoying it) until the final flag.

Anyway, there’s no way not to be moved by Marquez’s interview. And the best part, the Spaniard showed that he returned to fight for the first positions and for the title.

MotoGP returns on May 2, with the Spanish GP in Jerez.