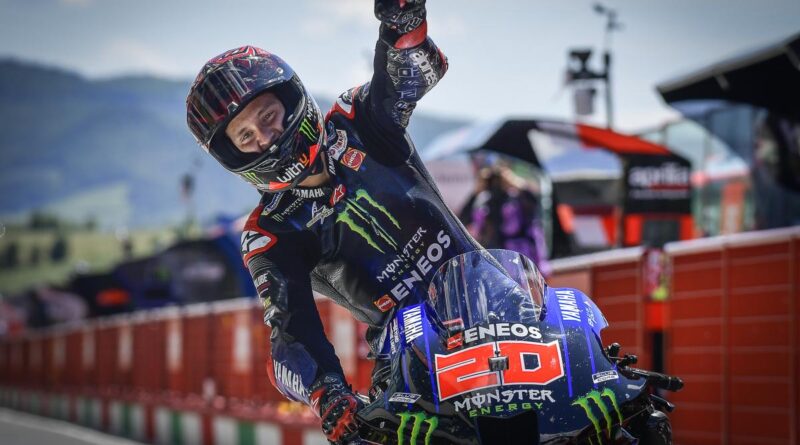 Fabio Quartararo, Monster Energy Yamaha rider in MotoGP, won the Italian GP at Mugello this Sunday. The Frenchman opened up even more advantage in the championship lead, and dedicated the victory to Jason Dupasquier, who died after a serious accident in Moto3.

Sunday started sad with the information of the death of Jason, who could not resist the injuries sustained in Saturday’s accident, when he was hit on the track by another rider’s bike, in the Moto3 category.

Back to this Sunday’s race, Quartararo started well from pole position, but in the first corner he was overtaken by Francesco Bagnaia (Ducati Lenovo Team). The Frenchman managed to stay close to the Italian, and was constantly trying to regain the lead.

Bagnaia did not resist and after a small mistake, when he touched the kerbs in a high speed curve, he lost his front, fell and abandoned.

With that, Quartararo found no more difficulties, and just headed for the victory, with perfect riding, without making mistakes.

The dispute ended up being in the other positions. Who was benefiting from the fall of Bagnaia was Johann Zarco (Pramac Racing Ducati), who had started from 3rd position, occupied the 2nd good part of the race, but lost performance at the end and finished in 4th.

Jack Miller (Ducati Lenovo Team) did not perform well, and managed to be only sixth. Aleix Espargaro (Aprilia Racing Team Gresini) had a solid race and finished seventh, ahead of Maverick Viñales’ Yamaha (Monster Energy Yamaha).

Danilo Petrucci (Tech 3 KTM Factory Racing) crossed the line in ninth, and ‘The Doctor’, Valentino Rossi (Petronas Yamaha SRT) came out of the race at Mugello in tenth.

Anyway, Quartararo leaves Italy in the lead of the championship, with 105 points, 24 points more than the runner-up, Johann Zarco, who has 81 points.

See the race result in Italy:

MotoGP returns on June 6, with the Catalan GP.