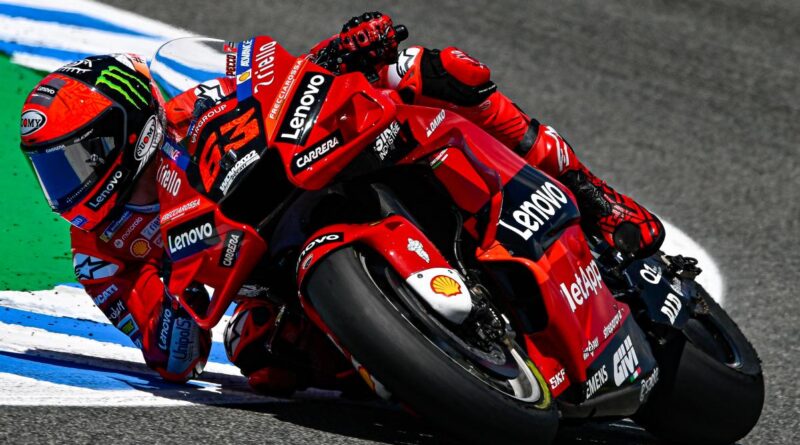 Francesco Bagnaia, Ducati Lenovo Team rider in MotoGP, won the Spanish GP, this Sunday, after a solid race, where he managed to hold the championship leader, Fabio Quartararo.

The Italian, who is still not 100% physically, started from pole position and led the entire race, suffering pressure only from the Frenchman. But he drove brilliantly, made no mistakes, and crossed the finish line first, just 0.285sec ahead of Quartararo.

The Yamaha Frenchman did not come away sad with second place. On the contrary, he increased his lead in the championship, as one of his rivals (Alex Rins – Team Suzuki Ecstar) did not score.

The fight on the track was for third place on the podium, between Jack Miller (Ducati Lenovo Team), Marc Marquez (Repsol Honda Team) and Aleix Espargaro (Aprilia Racing). Marquez and Espargaro were faster than the Aussie, but they couldn’t make the pass.

It was only in the last few laps that the Honda rider decided to take the risk and try the maneuver on the Ducati. In one of the corners, he put it on the inside and put himself in front, but he made a mistake in braking and was passed back. Had to ‘row’ it all over again.

With a few laps to go, he overtook again, this time without giving a chance. But, in the last corner, the Spaniard was falling, managed a really nice save, but was passed by Aleix Espargaro, who took advantage of the situation and made a double pass.

From there, the Aprilia rider managed to open up a certain gap and crossed the finish line in third. It was his third podium of the season and, with the result, he took the championship runner-up, just 7 points behind Quartararo.

Marquez crossed the line in fourth and Miller was fifth, ahead of Joan Mir (Team Suzuki Ecstar) and Takaaki Nakagami (LCR Honda Idemitsu).

Anyway, the race was a little monotonous, there was no dispute for the lead, but the dispute for third place livened things up a little. Quartararo is the championship leader, with 89 points, and Aleix Espargaro is second, with 82 points. Next stop: French GP at Le Mans.

See the Championship standings after the race in Jerez:

MotoGP returns on May 15, with the GP of France, at the Le Mans circuit.