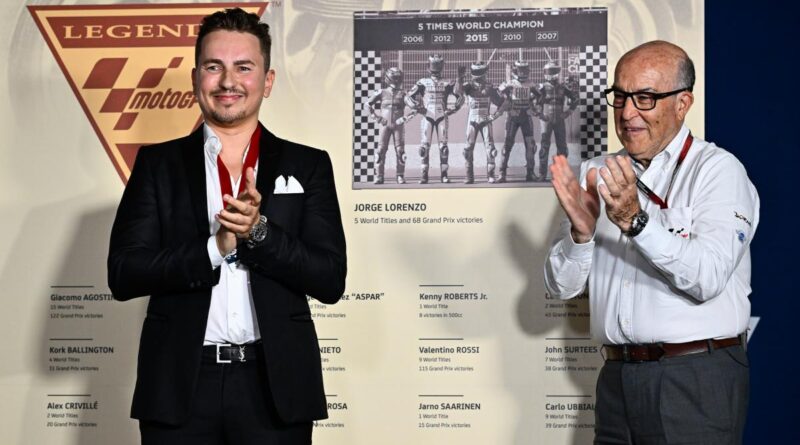 Five-time World Champion Jorge Lorenzo is now a MotoGP Legend! The Spaniard was inducted into the Hall of Fame at the Circuito de Jerez-Angel Nieto in a special ceremony on Saturday, honouring a long and successful career.

Lorenzo made his 125cc World Championship debut at Jerez in 2002, and from there the rise began. For 2005 he moved into the 250cc class and then won his first World Championships with back-to-back titles in 2006 and 2007, taking more than half the victories on offer across the two seasons. He moved up to MotoGP for 2008, partnering Valentino Rossi at Yamaha, and took his first MotoGP victory only third time out.

In 2009, he was runner up and the season also staged one of the races of the century as Rossi vs Lorenzo at the Catalan Grand Prix became one of the most memorable duels in MotoGP.

In 2010, however, Lorenzo’s time had come and it was a near-perfect season as he was crowned MotoGP World Champion for the first time. 2011 went to key rival Casey Stoner before 2012 saw Lorenzo take the crown once more. 2013 and 2014 went to new rival Marc Marquez, before Lorenzo was crowned Champion again in 2015 after another Rossi vs Lorenzo showdown.

2016 was a final year with Yamaha before moving to Ducati for 2017, and after a first season with a few podiums, Lorenzo took three sublime victories for the Borgo Panigale factory in 2018. The season was then curtailed by injury and he switched to Repsol Honda for 2019. After a tougher year and more injury struggles, the five-time World Champion hung up his leathers at the end of the season.

Over an incredible career, Lorenzo won 68 races and stood on the podium an incredible 152 times. He won two 250cc World Championships and was crowned MotoGP World Champion three times, as well as winning premier class races with two factories. Now, he is officially a MotoGP Legend!

Carmelo Ezpeleta, CEO of Dorna Sports: “Jorge has been something special for MotoGP. In my opinion, Jorge, first of all, is a fantastic person. He’s very emotional, he’s a friend, he’s a person who tried to do the maximum every time he did something, and he’s an incredible rider. For us, Jorge has been, in this generation, very, very special, who has allowed us to grow as we are growing. It’s a special moment for MotoGP and personally for me to say thanks to Jorge and to induct the 33rd Legend of MotoGP. He’s part of the most important riders in the history of MotoGP and I’m very proud to give him this award. Thank you, Jorge.”

Jorge Lorenzo: “I arrived here 20 years ago at this track to make my debut and I was still 14 on Friday. So, I went to watch at a few corners with a scooter and I saw the likes of Cecchinello, Ueda, Vincent, Pedrosa, Poggiali all riding. For me, they were heroes. And I saw them riding so aggressively and so fast, that I was wondering if someday I could arrive at that level.

“Now, I’m given the honour of becoming a MotoGP Legend from Dorna, from Carmelo, that have always treated me so well, and this means even more than the Championships I won. Because all of the MotoGP Legends are great Champions, but not all Champions can be named as Legends, so I’m very proud to be part of this amazing group, these names. I’m so lucky, so grateful to have the life I have thanks to MotoGP.”