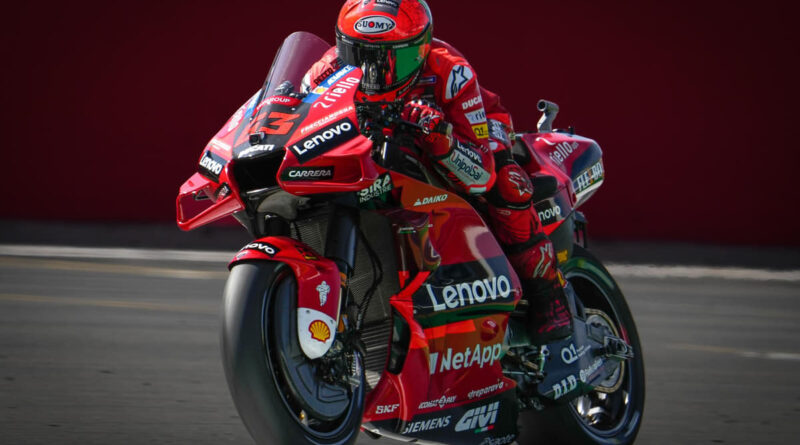 Francesco Bagnaia, a MotoGP rider for the Ducati Lenovo Team, won the British GP on Sunday after resisting pressure from Maverick Viñales (Aprilia Racing) in the final laps.

With that, and with the result of the other riders who are in the fight for the championship, the Italian still dreams of the title, as he occupies the third position and has a disadvantage of only 49 points to the leader.

Bagnaia wasn’t confident for the weekend, but he got the ‘grip’ he wanted moments before the race. He started from fifth position but in the first corner he was already third, behind only Johann Zarco (Pramac Racing) and his teammate, Jack Miller.

The two were very close to the Frenchman and putting pressure until the Pramac rider ended up sliding with the front wheel and going to the ground, giving Miller the lead in the race.

It didn’t take long for Bagnaia to take over, but soon after, he was overtaken by Alex Rins (Suzuki Ecstar Team), who seemed to have more pace. The Suzuki rider led a few laps, but started to lose performance. With that, the Italian made the overtake and led the rest of the race.

It was only in the final laps that Bagnaia came under pressure from Viñales, who overtook him on the penultimate lap, but quickly took the position back.

The Aprilia rider was one of those who made a recovery race, as he started from second position, dropped to sixth, but managed to make several passes and finished second. He even flirted with victory, with a brief overtake over Bagnaia, but he made small mistakes that decided in the Italian’s favour.

Miguel Oliveria (Red Bull KTM Factory Racing) was sixth and Alex Rins was seventh. Defending champion Fabio Quartararo (Monster Energy Yamaha MotoGP) finished only in eighth position, after having to take a long lap penalty (applied in the previous race), and for having chosen the wrong tire, as he opted for the medium in the rear and most used the hard.

Finally, Aleix Espargaro (Aprilia Racing), who is the other contender for the title and who occupies the runner-up position, ended the race in ninth, despite suffering some pain, as a result of a bad fall he had in free practice 4, on Saturday. He, who left with a limp and was taken to the medical center, managed to get the doctor’s release to participate in the weekend, as no fracture or concussion was found. In qualifying, he managed to get on the bike and set the sixth best time. In the race, he didn’t have the performance he wanted, and he had to settle for 7 points.

Anyway, the race was quite hectic, with practically all the riders vying for positions from start to finish. Bagnaia came out victorious and still breathes in the championship, but both Quartararo and Espargaro went from zero to zero, that is, they practically neither gained an advantage nor lost, in relation to each other.

Now the MotoGP circus takes a week off and returns at the end of August. Next stop: Austrian GP.

See the Championship standings after the race in Silverstone:

MotoGP returns on August 21 with the Austrian GP at the Spielberg circuit.