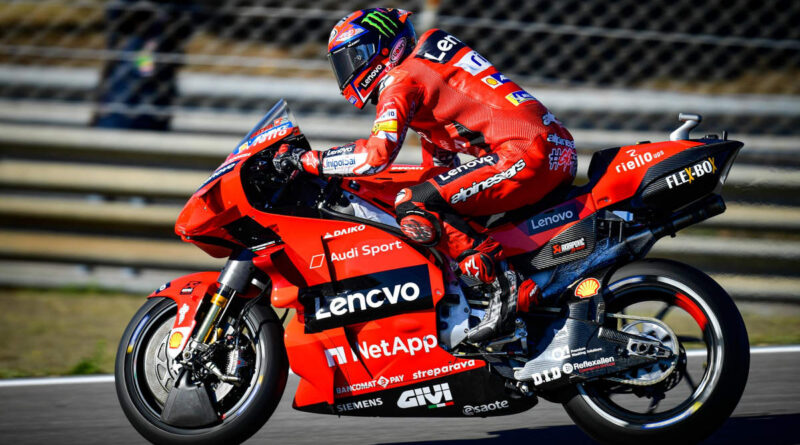 Ducati Lenovo Team MotoGP rider Francesco Bagnaia, won the Algarve GP this Sunday and gave the constructors’ title to Ducati. It was his third win of the season, with his teammate Jack Miller also climbing the podium in third, in a race that ended with a red flag.

Bagnaia, who started from pole position, had a solid race, without making any mistakes, and gave the Suzuki rider no chance. He managed to hold on to the pressure at the start, but quickly opened up an advantage for the win, which came with a red flag with two laps to go, after an accident between Tech3 KTM Factory Racing’s Iker Lecuona and Red Bull KTM Factory Racing’s Miguel Oliveira.

With the race stabilized in the top two positions, the dispute was for the last place on the podium, with Alex Marquez (LCR Honda Castrol) managing to overcome Miller. But with six laps to go, the Aussie managed to recover and finish third despite being under enormous pressure from the Spaniard due to a drop in performance on his rear tire. He would probably lose his position, but then the red flag came.

Marquez (the younger brother, as the older one was left out of the race) finished fourth, therefore being the best Honda classified.

Johann Zarco (Pramac Racing) finished fifth and with it he took the title of best independent rider. Pol Espargaro (Repsol Honda Team) finished sixth after losing some positions during the race and having to fight hard. He also benefited from the crashes ahead.

Anyway, Quartararo leaves the Algarve with his first DNF but, with the title under his arm, he doesn’t need to worry anymore.

See the race result in Algarve: