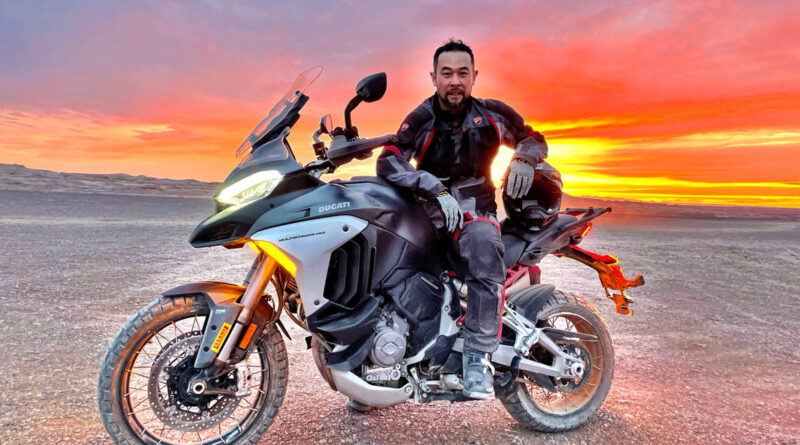 “Ducati Multistrada V4 Silk Road Grand Tour” is a unique riding story aboard the Multistrada V4 that highlights the beauty and the unique cultures of iconic locations in China and at the same time the qualities and versatility of the Multistrada V4, which on this journey proved once again to be the perfect companion on all types of terrain.

The first episode of the series is already available on the Ducati.com website and you can also watch on YouTube.

Here is the first episode, about Xinjiang:

The shooting of the documentary lasted about two months, during which the Multistrada V4 travelled over 10,000 kms, crossing five different provinces and 2,000 years of history.

The journey touched locations such as Inner Mongolia grasslands, Gobi Desert, Yunnan tropical rainforests and the mountain city of Chongqing.
In each of the five episodes, a special rider illustrates a different aspect of the Multistrada V4, writing a page of this itinerary to discover the local traditions and the unique landscapes.

In the first episode, Zhao Hongyi, the first Chinese rider to have completed Dakar race, brings his family to discover the wild beauty of Xinjiang. In the second episode, Wen Congping and 9 representatives of Ducati dealerships in China travel along the road that connects Wuhan to Suizhou to take part in a charity project together with “Shangzhen Central Primary School”.

The third episode sees the Multistrada V4 tackle the mountain roads of the city of Chongqing ridden by Xu Qun, an expert in the automotive sector. The fourth episode instead has the Yunnan tropical forest as its protagonist with the influencer Chen Zhen who was able to appreciate the versatility of the Multistrada V4 on a varied and colourful route.

Finally, in the fifth episode Luo Hao and the singer Mao Chuan cross the vast grasslands of Inner Mongolia, experiencing the sense of freedom typical of travelling by motorcycle in company.

Such a varied journey has helped to enhance the attitude and potential of the Multistrada V4: a complete bike on any terrain, capable of dominating all roads.

The latest V4 Granturismo engine is always ready to give a sporty ride, the state-of-the-art technology makes every journey comfortable thanks also to the front and rear radar, while the electronic suspension and the surprisingly fluid power delivery proved to be up to par also for the challenging routes.

The next episodes of the “Ducati Multistrada V4 Silk Road Grand Tour” will be published on Ducati.com website over the next few months.