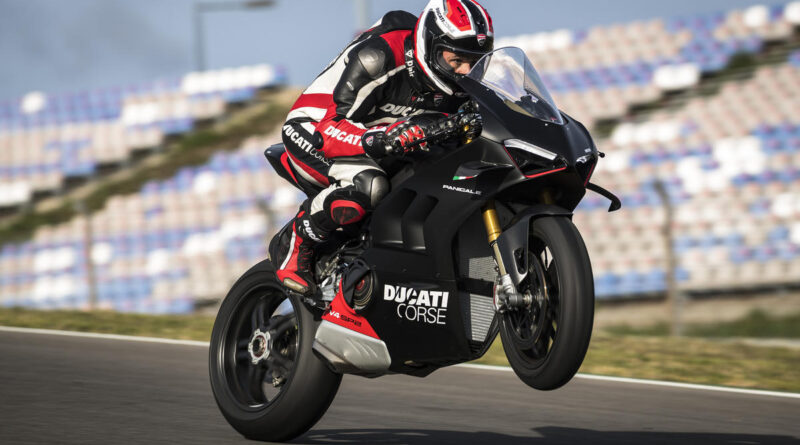 According to the brand, the Panigale V4 SP2 is the top-of-the-range model of Ducati supersport motorcycles, designed to fully experience the passion for riding on the track. It’s a special bike in a numbered series, with exclusive “Winter test” livery based on WorldSBK test models and a host of carbon fiber accents.

In addition, the bike is also delivered with a kit for track use, which includes aluminum mirror removal covers, plate holder removal kit and opne carbon clutch cover.

The Panigale V4 SP2 is distinguished from the other models by the “Winter test” paint, which combines a matte black fairing with a matte carbon finish on the wheels and fenders, contrasting with the bright red details and the shine of the exposed brushed aluminum tank.

Finally, the steering head is machined from a solid part and shows the progressive number of the motorcycle, making each model unique.

The engine of the Panigale V4 SP2 is the 1,103 cm³ Desmosedici Stradale derived from MotoGP, which has received several updates and has become more powerful, in addition to being EURO5 compatible.

The new engine has been updated in the lubrication circuit and is coupled with a new oil pump that reduces power absorption. The increase in the diameter of the muffler outlets makes it possible to reduce the exhaust back pressure and, consequently, increase the engine’s performance.

In addition, Ducati has developed dedicated gear-to-gear torque curves and four different power modes (Full, High, Medium, Low). The Full and Low settings were recently developed, while the High and Medium settings use a new strategy.

Finally, the Panigale V4 SP2 arrives with the “track-oriented” gearbox already featured on the 2022 Panigale V4, but adds the lighter final drive 520 chain and STM-EVO SBK dry clutch. This clutch guarantees a more effective anti-hopping function in extreme use of the bike on the track.

In addition, it is also equipped with exclusive Brembo Stylema R front brake calipers, which ensure high stopping power combined with exceptional performance consistency. The calipers are operated by a Brembo MCS (Multiple Click System) radial pump that allows you to quickly and easily adjust the wheelbase in three settings to customize the braking feel.

Another element that characterizes the Panigale V4 SP2 is the equipment with Rizoma footpegs in anodized aluminum with carbon fiber heel protectors. They are fully adjustable and maximize ground clearance for more effective use on the track.

The Panigale V4 SP2 is equipped with a state-of-the-art electronics package based on the use of a 6-axis inertial platform. In addition, it has an improved panel, whose operating parameters are linked by default to the 4 riding modes (Race A, Race B, Sport, Street).

All the electronic parameters of the bike can be clearly visualized thanks to the dashboard and the “Track Evo” display mode, derived from the one used in MotoGP.

Furthermore, in this ‘SP2’ version, the GPS module is standard, thus allowing the activation of the automatic Lap Time function, which instantly provides the indication of two partials of the track you are running on.

Finally, thanks to the Ducati Data Analyzer, standard on the Panigale V4 SP2, it is possible to carry out an in-depth analysis of all performance data.

The new Panigale V4 SP2 is available in a single seater configuration in the “Winter Test” livery from March 2022.