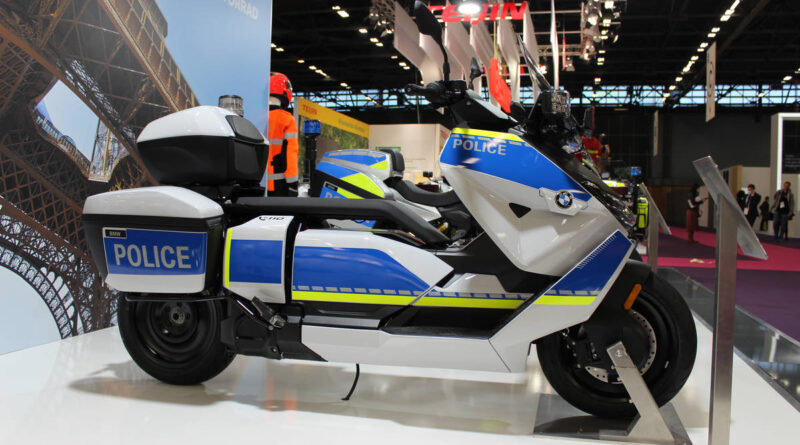 BMW Motorrad celebrated the debut of its electric scooter BMW CE 04 at Milipol 2021, most important security event in the world, which took place in October in Paris. The brand presented one of its latest electric models with an official police version, developed by BMW Motorrad Netherlands.

According to BMW, the new CE 04 plays a particularly important role, since the dynamic, environmentally friendly electric scooter not only offers a concept tailored to special authorities requirements by offering flexible options and a high level of operational expertise in urban and metropolitan areas.

With a maximum output of 30 kW (41 HP), the new BMW CE 04 features a powerful motor and offers the best prerequisites for police work in the city and urban areas. The top speed is 120 km/h – enabling fast riding not only in the city, but also on motorways and motorway sections.

With 60.6 Ah (8.9 kWh), the new BMW CE 04 has an ample battery cell capacity and provides a range of around 130 kilometers. This ensures everyday, reliable and emission-free riding in the city as well as in urban environments.

In addition, the authorities version of the new CE 04 also has a number of technical highlights:

• Short charge times and charging technology based on the system used in cars.

• Three riding modes “ECO”, “Rain” and “Road” for efficient, everyday use as standard.

• Storage compartments at the side and front.

• Customisable ergonomics thanks to a choice of various seats.

Special optional equipment for the authorities versions of the new BMW CE 04:

• LED flashing lights front and LED beacon in the rear.

• Additional switch for controlling the light and sound signal components.

The BMW CE 04 has a futuristic design, with straight lines and defined angles, full of cutouts. It is bold, with the center and back formed practically by a flat piece.

The seat, described as “floating”, is completely flat, escaping the two-level trend, and which can leave the passenger with a blocked view.

The modern surface finish is in a light white, complemented by matte black sections in the front and side areas, as well as the “floating” seat.

In addition, there are trend-setting wheels (solid wheels) with a disc wheel look and a side stand that is integrated into the design styling.

Finally, the BMW CE 04 is offered in Germany, starting at €11,990. For more information, visit the BMW Motorrad UK website.