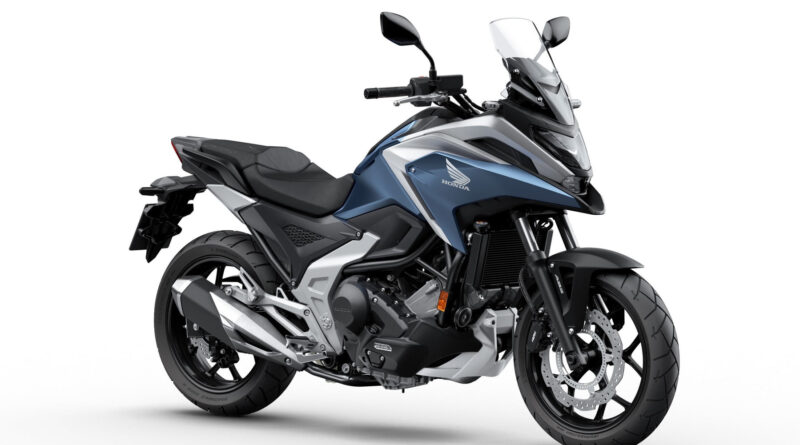 Honda has launched in Europe the 2023 NC 750X, its 750cc adventurous crossover motorcycle, which arrives with new colors and graphics, but maintains the same mechanical set as the previous model.

So the NC 750X is trying to continue its reign as a favorite across Europe since its introduction (originally as the NC700X in 2012), a preference won thanks to its low-fuel, torque-laden twin-cylinder engine, relaxed riding position, long-travel suspension and distinctive adventurous styling.

For 2023, it doesn’t change its mechanical set or its design, both updated in 2021, when it received light body updates and a new lighter and more powerful engine.

The 2023 NC 750X had, in 2021, a slightly revised design, with sharper lines and more defined angles, and the inclusion of new LED headlights with DRL (Daytime Running Light), in addition to turn signals, also LED.

It also received a new windshield, which brought more protection from wind and rain. In addition, the side panels and side covers are slimmer and the seat narrower.

Finally, the model has been equipped with a new fully digital LCD panel, which allows the management of the 3 riding modes through the selection switch on the left grip.

In terms of mechanics, the NC 750X engine was revised and became 1.2kg lighter and started to deliver more power at higher rpm, reaching 7,000 rpm at the beginning of the red mark.

Peak power was increased to 43.1 kW (58.9 HP) at 6,750 rpm, with 69 Nm (7.03 kgfm) of maximum torque at 4,750 rpm. Along with the performance boost are shorter gear ratios compared to first, second and third gears (for manual and DCT), plus HSTC – Honda Selectable Torque Control – traction control.

In addition, the model also gained an assisted and slipper clutch in its 6-speed manual transmission. As expected, a version with the DCT dual-clutch automatic transmission is offered.

Finally, the NC 750X also received a chassis revision, which was 1.8kg lighter than the 2020 model, contributing to a total weight reduction of 6kg.