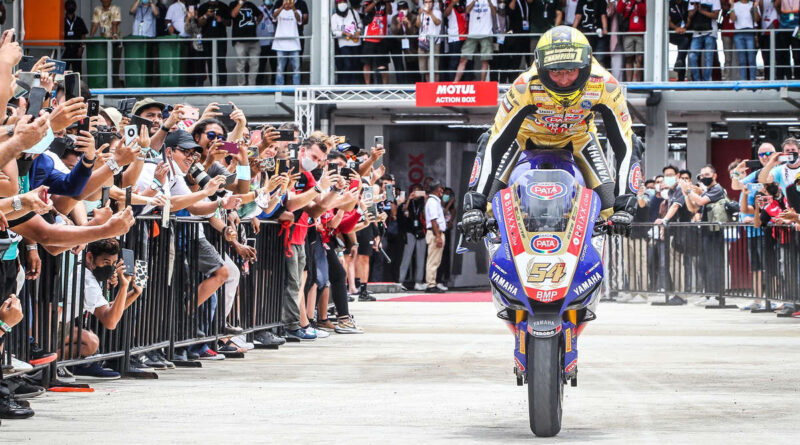 Toprak Razgatlioglu, a Yamaha rider in the WorldSBK Superbike Championship, was crowned the 2021 World Champion, this Sunday (21). The Turk won the title already in race 1 at the Pertamina Mandalika International Street Circuit in Indonesia, when he finished in second position.

It was also Yamaha’s first title in the category since Ben Spies, in 2009. In addition, the brand won the manufacturers title, something that hasn’t happened since 2007.

Despite losing the title, Jonathan Rea (Kawasaki) was the weekend rideer in Mandalika, as he won both races of the round. Toprak came in second in race 1, and fourth in race 2. The Superpole race was cancelled. With that, he took the title with just 13 points ahead of Rea.

It was one of WorldSBK’s hottest seasons in recent years, with 13 wins for Toprak and Rea, and the champion was only known in the last round.

Toprak entered the WorldSBK in 2018 for Kawasaki Puccetti Racing, a ‘satellite’ team from Kawasaki. In 2020, he moved to Yamaha, where he took three victories in his first campaign.

In the 2021 campaign, he won the title with 13 wins and 28 podiums in 35 races. With his success in 2021, he becomes only the second Yamaha rider to be WorldSBK World Champion, after American Ben Spies in 2009, and the 18th different rider to be crowned in WorldSBK.

He managed, finally, to put an end to the reign of Jonathan Rea, who dominated the category since 2015 and sought his seventh consecutive title.

It was a deserved title for the Turkish rider because he rode flawlessly this season. He even aroused interest from other categories, especially MotoGP, where Yamaha offered him a seat, but that was refused (for now). He made it clear that he wanted to be WorldSBK Champion before thinking about moving to MotoGP.

The change doesn’t happen in 2022 either, as he has another year of contract with the team at WorldSBK. He will try again to win another title and, then yes, he will probably be heading to the dream of many riders, the MotoGP, which is considered the maximum category of motorcycling in the world.

So, congratulate Razgatlioglu on his first WorldSBK Championship using the hashtag #OnTOPrak on social media!