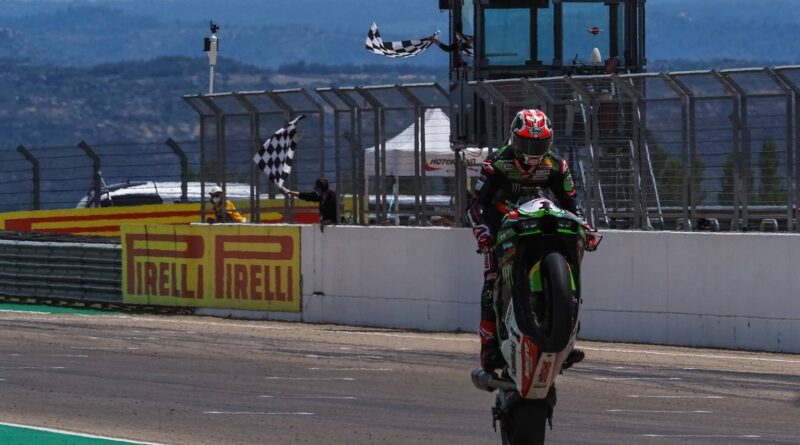 Jonathan Rea, a Kawasaki rider, won race 1 (on Saturday) and the Superpole race (this Sunday), in Aragon, Spain, for the WorldSBK world superbike championship.

With that, the North Irish surpassed the mark of 100 victories in the category and became the first to achieve such feat (to win 100 races in a single class of FIM world championships).

In race 2, Scott Redding (ARUBA.IT Racing – Ducati) got the most of the situation, and won the race with slick tires on a kind of wet/dry track, showing great courage.

In the Superpole race, Michael van der Mark (BMW Motorrad WorldSBK Team), who took the risk with slick tires and got a great result, came out from 15th on the grid to finish fifth.

With that, he started from fifth position in race 2 (with intermediate tires), ‘fought’ a lot on the track with Jonathan Rea, Alex Lowes and Toprak Razgatlioglu, and managed to finish in fifth, (he was second on the track at some point).

Therefore, Kawasaki started this season really strong, with two doubles (race 1 and Superpole), in addition to 2nd and 3rd in race 2. BMW was another brand that demonstrated good performance, at least in the Superpole, with Van Der Mark in fifth , and in race 2, with Tom Sykes in fourth, Van Der Mark in fifth and Jonas Folger (Bonovo MGM Racing satellite team) in eighth.

Anyway, the world superbike WorldSBK returns from May 28 to 30, at the Estoril Circuit, in Portugal, for another round.