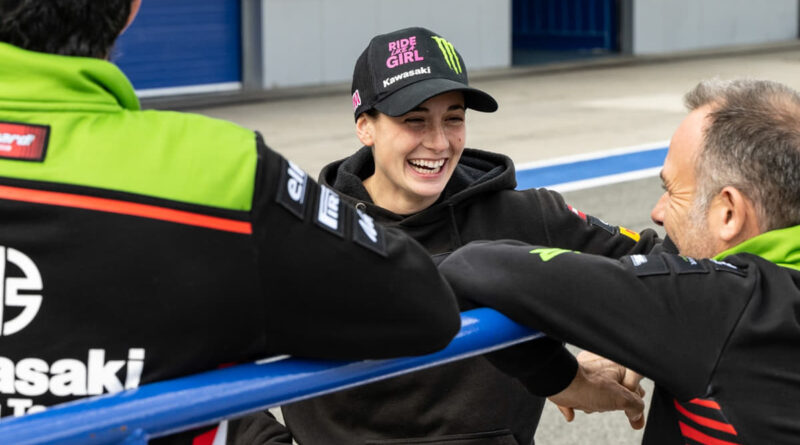 Ana Carrasco, the first-ever female motorcycling World Champion, is leaving the WorldSBK Championship in the WorldSSP300 category, and will compete in Moto3 in 2022, MotoGP‘s 250cc category.

The Spaniard has already competed in the Moto3 World Championship from 2013 to 2015, then moved to the Superbike World Championship in 2017. In 2018, she won the title, with just 1 point difference from her opponent. In 2019, she fought hard but only finished third in the championship.

In 2020, she suffered a fall where she fractured two vertebrae and had to undergo surgery, forcing her to spend half of the season off the tracks. In 2021, she encountered many difficulties and finished the championship in 16th.

It was, therefore, five seasons, 50 races, 12 podiums, seven wins and three pole positions, in addition to the title in 2018. Now, she is trying to get a good result in Moto3, and hopes to grow even more.

Discussing her move to Moto3 and thanking Kawasaki, Carrasco said: “Racing is tough, not just on track where people see but also at times like this when you have to make tough decisions. My ambition is always to grow as a rider, to set myself new goals that other’s see as impossible and to achieve them.  When my parents bought me my first minibike and then I started racing of course my dream was like any rider ‘one day I want to be a World Champion’. This I achieved in 2018 and even today that feeling is magical; but anyone that understands racing will know that every racer needs to push, to be ambitious and to test themselves again and again.”

“This opportunity to ride in Moto3 is a logical step in my mind even if the emotional step is hard. I would like to thank everyone at Kawasaki who truly made me feel part of a racing family, of course to my pit crews and team staff across these years who gave me the best machinery to compete on plus Provec who created a professional environment that was just incredible. Finally, I must say a special thanks to Eliseo Escamez, Alvar Garriga, the Roda brothers and all Provec team members, who were always there for me with friendly help and advice and truly believed in me and, of course, my parents who started this amazing journey. I thank all of you and hope you understand you all played a part in making me the rider and person I am. I hope I can repay your kindness with a second World Championship. Thank you.”

The World Superbike Championship starts on April 8th with the Aragon round. For more information, visit https://www.worldsbk.com/.