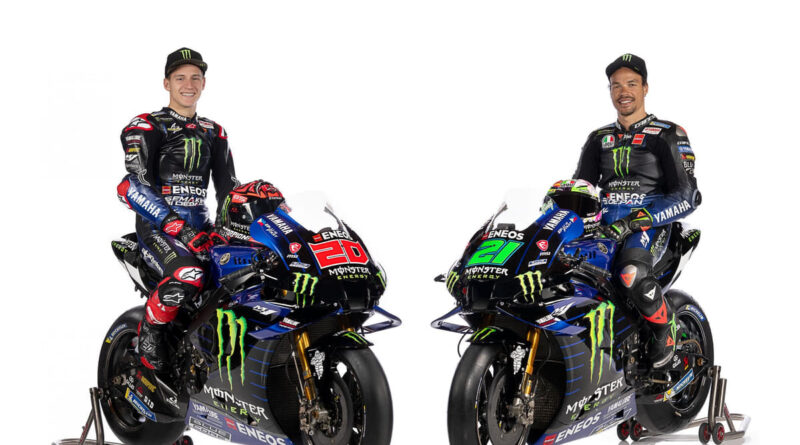 Yamaha has unveiled the Monster Energy Yamaha MotoGP bikes for the 2022 MotoGP season. The factory team continues with the two riders from last season, the Frenchman Fábio Quartararo, who won the World Championship, and the Italian Franco Morbidelli, who joined the official team after returning from surgery on his knee.

They will join Cal Crutchlow at the Official MotoGP Sepang Test, who has signed on for one more season as the official test rider.

Quartararo and Morbidelli will race the same bike in 2022, namely the Yamaha YZR-M1, with virtually no design changes.

The factory Yamaha remains in the same livery as last season, with most of the bike in Blue and with good emphasis on the Monster Energy logo.

Fabio Quartararo: “The winter break was quite long, but if I’m honest I feel like I kept busy the whole time. There were many events for me to attend, and of course training continued as normal – so all in all it was quite busy, but in a good way. I’m excited to begin the new season and start riding and improving. We got the title last year, and that’s great. Nobody can ever take that away from me, but as of the first day of riding, none of that matters anymore. Last year’s title win is behind us now, we must focus on this year’s championship. Last year we barely did any pre-season testing due to the pandemic. This year I already have a year of experience with the Factory Team, so we know how to work well together. We know our strengths and where we can improve, so that will help during the tests in Sepang and Mandalika.”

“The team’s morale is great, and the atmosphere has never been better. The new crew members that joined us last year have gelled incredibly well with the other staff. As Team Director I couldn’t ask for a better crew to start this next title quest with. We are also very lucky to have such a strong rider line-up. Both Fabio and Franco are undisputed talents, and their riding suits our bike too. One of them will be looking to confirm his dominance in the MotoGP field, while the other is eager to showcase his full potential now that he is getting closer to a full recovery from his injury, so we are ready to fight.”

Franco Morbidelli: “Last year was all about showing mental strength whilst working on improving my physical strength. It was not easy to come back after the surgery on my knee, but the work that I did last year will be beneficial for me at the start of this season. We already have some data to work with, and I’m already familiar with the bike and the team. I have always had a good feeling on the Yamaha, but this M1 is so smooth. I can’t wait to start riding the 2022 bike now that my knee is in a better condition. I’m very interested to see how our progress will continue. I also look forward to seeing the whole team again at the tests. The atmosphere in the team was really nice last year, so let’s see what steps we can make during winter testing.”

Lin Jarvis, Yamaha Motor Racing Srl Managing Director & Monster Energy Yamaha MotoGP Team Principal: “Last year’s title victory was the best way to give back something special to Monster Energy Company to express our thanks for their continuous support and faith in our team. This year, we are entering our tenth year with Monster Energy as our sponsor and our fourth season with them as our title sponsor. They are fully immersed in and dedicated to motorsports and our strong global alliance makes our brands instantly connected. The 2021 Title win with Monster Energy as title sponsor was the absolute highlight of our successful partnership so far.”