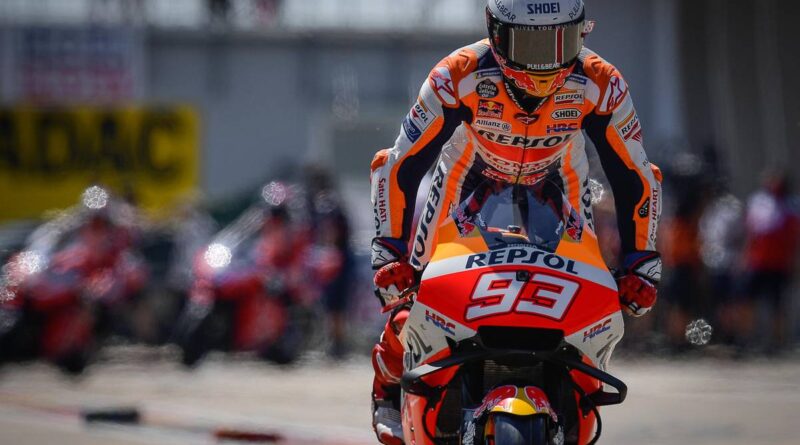 Marc Marquez, Repsol Honda Tem rider in MotoGP, had a perfect race this Sunday at Sachsenring, and won the German GP. The Spaniard (also known as the ‘King of the Ring’), managed to hold Miguel Oliveira (Red Bull KTM Factory Racing) who, once again, demonstrated his strength.

Marquez, who started from 5th, managed to place himself in second at the first corner, behind only Aleix Espargaro (Aprilia Racing Team Gresini), who made a spectacular start.

Aleix, who came from 3rd position, took the lead in the first corner. But after a few turns, he saw Marquez apply pressure and make an overtake. He managed to get back on a few occasions, but when Marquez passed again, it started to rain and the Honda Spaniard managed to open up a gap.

Marquez said that when it started to rain (it was actually a few drops, not enough to force a tire change), it was his race. He took advantage of this moment to push hard and open a certain advantage (around 2 seconds).

But, who challenged him a few laps latter was Miguel Oliveira, who passed Zarco (pole position), Jack Miller (Ducati Lenovo Team), Fabio Quartararo (Monster Energy Yamaha) and, finally, Aleix Espargaro. The Portuguese was the only one who could lap in Marquez’s time (sometimes even faster), as he managed to reduce the difference to 1 second, but it didn’t work, he had to settle for second (and excellent) place.

With that, Marquez got the victory after 581 days since his last one, leaving him very emotional in the interview after the race. Magnificent victory that puts him back in the spotlight for the next races. Follow the repercussions on social media with #KingOfTheRing.

Despite the third place, it was a good result for Quartararo, (he didn’t feel the bike too competitive), as he managed to open up even more advantage in the championship. In fact, he was the best Yamaha rider, as Valentino Rossi (Pretronas Yamaha SRT) was 14th, Franco Morbidelli, 18th and Maverick Viñales, 19th (and last).

Aleix Espargaro managed to finish only seventh (he said that despite the good start, the Aprilia ‘still not ready’), Johann Zarco (Pramac Racing) was eighth and Joan Mir (Team Suzuki Ecstar) was ninth.

Anyway, Quartararo leaves Germany in the lead of the championship, with 131 points, 22 points more than the runner-up, Johann Zarco, who has 109 points.

See the race result in Germany:

MotoGP returns on June 27, with the Dutch GP at Assen.