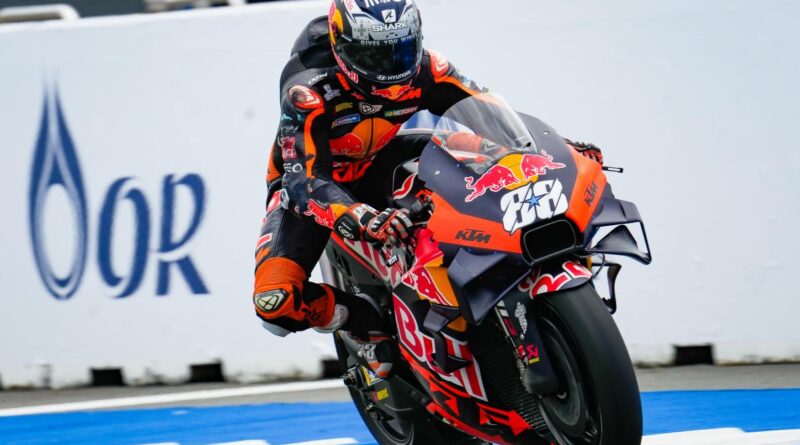 Miguel Oliveira, Red Bull KTM Factory Racing’s MotoGP rider, won the Thai GP this Sunday, in a race marked by rain that fell on the Buriram circuit and, consequently, by the delay.

But the race had an unexpected result for the 3 main contenders for the title: Fabio Quartararo (Monster Energy Yamaha MotoGP) was unable to perform well and did not score any points, as he finished in 17th position; Francesco Bagnaia (Ducati Lenovo Team) had a great race, managed to finish third, and closed the gap to the Frenchman to just 2 points; and Aleix Espargaro (Aprilia Racing), started badly, took a long lap penalty and only managed to finish in 11th position.

Jack Miller (Ducati Lenovo Team) led a good part of the race, after pole position Marco Bezzecchi (Mooney VR46 Racing Team) had droped one position as he had gained an advantage off the track to remain in first position, early on. Jack managed to open up a certain advantage over the other riders but Oliveira, little by little, began to show good performance and made several passes. He managed to get close to the Ducati rider but didn’t get the pass in such an easy way. It took him a few laps to, then yes, lead the race. After that, the KTM rider just headed for the win.

Bagnaia managed to resist pressure from Marc Marquez (Repsol Honda Team) and later from Johann Zarco (Prima Pramac Racing) to finish third. The Frenchman seemed to have more pace, but it seems that he held back not to overtake the Italian, who is now two points behind the leader in the championship, with just 3 races to go.

Marquez also tried a few times to get close to the two but, in the end, preferred to finish the race in fifth position, scoring a few points for Honda.

Anyway, the race in Thailand was a bit chaotic, with the rain delaying the start. Some did well, like Bagnaia and Oliveira, for example, but others did very poorly, like Quartararo for example, who left without scoring any points.

Now the MotoGP circus packs its bags and leaves for Oceania. Next stop: Australian GP.

See the Championship standings after the race in Buriram:

MotoGP returns on October 16th with the Australian GP at the Philip Island circuit.