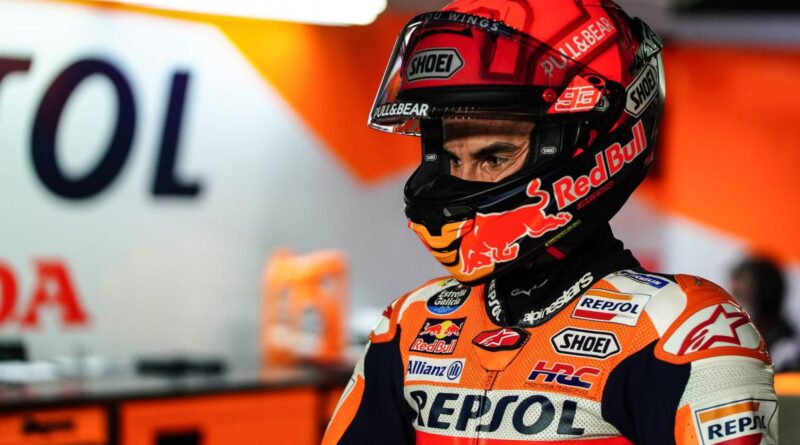 Marc Marquez is out of the Grand Prix of Argentina for MotoGP, which takes place this weekend at the Termas de Río Hondo circuit.

The eight-time World Champion is recovering from diplopia, caused by the last crash he suffered at the GP of Indonesia during Warm Up, a week ago.

The HRC star is still suffering the effects of another diplopia diagnosis but has reportedly shown progress after a visit to his doctor.

Marc Marquez visited his ophthalmologist, Dr Sánchez Dalmau, at the Hospital Clínic in Barcelona on Monday (28), where he underwent his second medical check-up.

In this new examination, Dr Sánchez Dalmau confirmed that the HRC rider’s diplopia shows a notable improvement and reaffirms that the progression of his vision is very favourable. As happened with the last episode of diplopia, the number 93 will continue to carry out a conservative treatment regime with regular check-ups.

Doctor Sánchez Dalmau: “The second neuro-ophthalmological evaluation carried out on Marc Marquez this past Monday has shown a very favourable evolution in the paralysis of the fourth right nerve affected by the fall that occurred at the Indonesian Grand Prix. Recovery is not yet complete, and Marc Marquez must follow the established therapeutic regime with conservative treatment.”

The replacement rider for the Argentinian GP will be test rider Stefan Bradl, who is familiar with the new Honda RC213V, having completed multiple tests with the bike already in 2022.

The German Test Rider is on a run of nine-point scoring finishes in a row in the MotoGP class and has a best finish of fifth in Argentina.

Stefan Bradl: “The most important thing is sending my best to Marc and hoping that he recovers quickly. Until then, I will do my best for Honda HRC and the Repsol Honda Team in his place. I have already done a few tests this year so I am familiar with the new Honda RC213V but of course coming into a MotoGP weekend is a different situation. I have some good memories of Argentina; I was fifth there in 2014 and seventh there when I last raced in Termas in 2016. We will work with the team to define the plan for the weekend, I have no doubt it will be a busy one.”