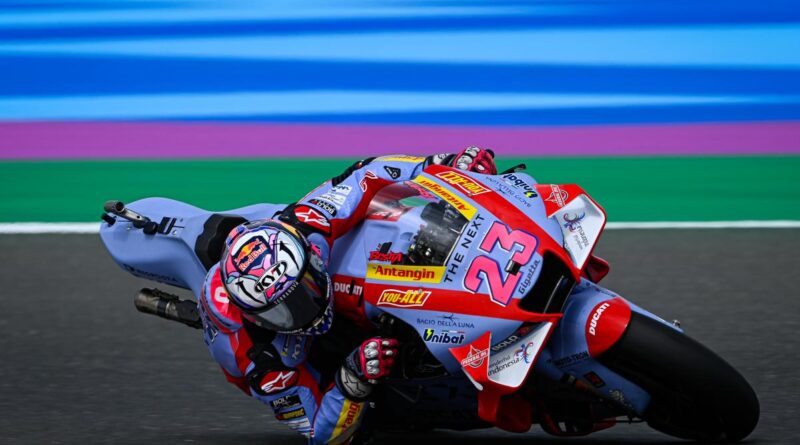 Enea Bastianini, a Gresini Racing MotoGP rider, won the thrilling GP of Qatar this Sunday on a 2021 Ducati bike. It was his first win in the premier class and a perfect tribute to the great Fausto Gresini.

It was a spectacular race at the Lusail International Circuit, with almost the entirety of it led by Pol Espargaro (Repsol Honda Team). The Spaniard drove a lot but, in the end, started having fuel and tire problems.

Unfortunately for him, as he is deserving a win in the category, a bigger star shone: Enea Bastianini, the young Italian rider who rides a Ducati bike from last year and who is in a satellite team, Gresini Racing.

Bastianini started from second position but ended up suffering some overtaking in the first corners. He didn’t budge, he kept his pace and started taking positions back.

Pol Espargaro opened more than 1 second of difference, but began to suffer in the final laps. Approaching fast, Bastianini did not think twice and would try to win. In the braking of the main straight for the first corner, he placed on the inside, gaining the position in the power of the engine and consequently in the final speed. Pol tried to resist, slowed down the brakes but, in order not to hit the Italian’s rear end, he went off the track. He ended up losing second place to Brad Binder (Red Bull KTM Factory Racing) as well.

In the end, the Honda rider still suffered some pressure from his brother, Aleix Espargaro, Aprilia Racing rider, but managed to secure the last spot on the podium. Aleix finished fourth, his best result on an Aprilia, just 2.2 seconds from victory.

Marc Marquez (Repsol Honda Team) was fifth, after much of the race fighting for victory with his teammate. He lost performance a little earlier and ended up accepting the result.

The race was disappointing for three official teams: Suzuki, Yamaha and Ducati. Despite their two riders finishing the race, Suzuki was one of the teams that did not produce as expected, as Joan Mir finished sixth and Alex Rins seventh. It’s not a bad result, but the team showed a lot more in pre-season testing and free practice. In the race, they even had good moments, and Mir even fought for the podium, but from the middle to the end, his performance was mediocre.

Yamaha failed to get past ninth with last season’s champion Fabio Quartararo. He lost eighth position on the line, on the strength of Johann Zarco’s Ducati engine. He couldn’t be more frustrated. His teammate, Franco Morbidelli, was eleventh.

But Lusail’s biggest disappointment was the official factory Ducati team, as its two riders, Francesco Bagnaia and Jack Miller, failed to finish the race. Jack retired with only a few laps to go.

Bagnaia, on the other hand, tried to overtake Jorge Martin (Pramac Racing), but ended up slipping head-on, taking them both to the ground and out of the race.

Finally, since we mentioned Martin, he was also a disappointment as he was pole position. He made a bad start, lost several positions and couldn’t regain a good rhythm to fight for the lead again.

See the race result in Qatar:

MotoGP returns on March 20th with the Indonesian GP at the Mandalika circuit.