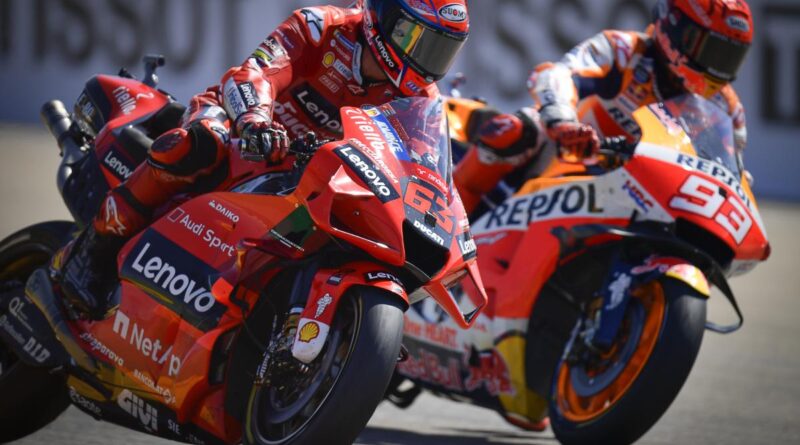 Francesco Bagnaia, Ducati Lenovo Team rider in MotoGP, won the Aragon GP this Sunday. It was his first victory in the premier class and a real show in a duel until the last lap with eight-time World Champion, Marc Marquez.

Bagnaia started from pole position and managed to keep the lead in the first corner, but Marquez, who started from fourth, took second place and kept very close to the Italian.

The Honda Spaniard rider didn’t rest the leader for practically the entire race, but he didn’t try an overtaking maneuver, he was being cautious (since he had several crashes in practice). But, with five laps to go, Marquez ‘turned on turbo mode’ and went over to the Ducati rider, trying to take the position and walk away with victory.

But it wasn’t easy. Ducati was extremely fast on the straights and in other sectors, Marquez could not convert the attempts. He tried everything, putting the inside in several turns, but immediately Bagnaia gave the payback. Until the eight-time Champion went all or nothing in turn 12, the hardest on the circuit, but he ended up leaving the track and, with that, allowing Bagnaia to have some slack in the lead to cross in first.

It was a deserved victory for the Italian who had already taken two second places. Marquez, meanwhile, showed critics that he is still the same bold and quick, but because he still has some physical limitations, he didn’t get the win. It was a show for those who watched and we can expect more in the next stages.

The podium was completed by Joan Mir (Team Suzuki Ecstar), who had her own battle with Aleix Espargaro (Aprilia Racing Team Gresini) and Jack Miller (Ducati Lenovo Team). The latter occupied third position until halfway through the race, but made a mistake in braking and was passed by the other two.

In sixth crossed Enea Bastianini (Avintia Esponsorama), another rookie and who had a spectacular race, scoring his best result in the premier class.

In short, Quartararo leaves Aragon still in the lead of the championship, but with less advantage over the second place, which is now Bagnaia.

See the race result in Aragon: