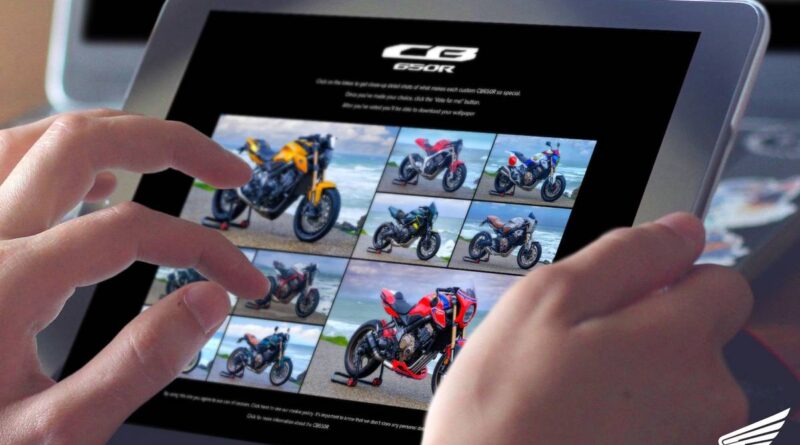 This summer, Honda Motor Europe was planning on showcasing ten of the best European dealer- built custom CB650R from France, Spain and Portugal at the Wheels & Waves festival in Biarritz, France from June 30th to July 4th.

Despite the show being cancelled, Honda still wanted to show motorcyclists across Europe the amazing ideas and customizations from the creative minds within their European dealer network, and are giving visitors to the Honda Customs webpage (www.hondacustoms.com) the opportunity to vote for their favorite.

Among the ten are a bike that pays tribute to the resurgence of a dealership following a devastating fire, a tribute to the classic French endurance racers of yesteryear and the seminal CB750 Four ‘K0’ from 1969.

The Honda Customs page is available in English, French, German, Italian, Spanish and Portuguese. Once users have voted for their winner, they will be able to download a wallpaper of their chosen bike for desktop or mobile as well as share their choice across their social media channels. The ‘prize’ for the winning dealer? Nothing more than the honour of having their creation voted as the best CB650R custom in Europe!

Here is a run-down of the ten bikes.

“Our CB650R Motorsport represents the transversal spirit of Honda, breaking the barrier that separates cars from motorcycles…”

In homage to Honda sporting history Motor Sport have used the 1966 Brabham Honda BT18 racing car as a rolling touchstone. Their bike’s unique, subtle green and yellow paint is complemented by blacked out handlebars, footrests, front forks and wheels. And, just like the car, its inline four-cylinder engine is the centrepiece, with cam cover picked out in yellow. A full titanium Akrapovič exhaust adds lightweight performance while the carbon-fibre nose cone and seat cowl are finishing details.

“If there is a word that defines our concept then it is kaizen.”

From the Japanese Kaizen (meaning ‘to improve’), Hakuba Motor’s sleek CB650R Akira reflects the never-ending quest for improvements, no matter how small. The classic single seat unit is a one-off carbon-fibre creation, topped with a nubuck leather seat trimmed in red to key with the subtle ‘straight line’ silver and red paint. CBR650R clip-on handlebars bolt straight on and the electronics are now sited in their own compartment under the seat. A titanium Arrow muffler underlines the minimalist ethos.

“A celebration of our custom dreams, and of a business founded in 1928.”

Blanmoto have gone down a ‘steam punk meets café racer’ route with their CB650R. And while its look is completely transformed, many of the parts used are from ‘mainstream’ suppliers such as Puig, PSR, Givi and Rizoma. Naturally, detail custom fabrication abounds: the seat has been modified and re-upholstered (alongside upholstered side covers) and there are new side-scoops manufactured from 1.5mm aluminium sheet. A blacked-out Arrow end-can injects stubby simplicity

“The name was obvious to us as, in 2019, our workshop was completely destroyed…”

As an emblem of renewal, the CB650R Fenix is a special symbol for the entire Mototrofa team, whose dealership has risen again from the ashes of a devastating fire. And while looking totally modern it also makes use of past Honda models. The single-sided swingarm and rear wheel are from a VFR750F, the front wheel from a CBR900RR FireBlade. Custom parts include the seat and rear cowl and the ‘93’ paint scheme (by Nexx Helmets) both pays homage to the incredible Marc Marquez and marks the year Mototrofa was founded.

“The legend of the Bol d’Or meets Neo Sports Café…”

Honda’s 24 hour endurance efforts are the races of true legend, and this CB650R has been built to celebrate the 1976 edition and the Honda RCB1000 raced by Jean-Claude Chemarin and Roger Ruiz. The red, white and blue colour scheme and Honda logos – seamlessly applied by A Brax Custom painting – instantly invoke a picture from the 1970s, as does the bikini nose fairing. A sports pack, including engine guards and seat cowl, maintain the racing feel while a Bagster seat neatly trims the mid-section.

“It’s family. To mirror the beautiful CB1000R Black Edition we have its little sister – the CB650R White Edition!”

The 3C Motos’ CB650R White Edition was conceived by 3C Motos in Biarritz to complement their moody ‘Black Edition’ CB1000R of 2019. Its paint – using matt white and varying shades of gloss white – adds texture and depth, and crowns the muscular depth of the jet-black engine and wheels. A CB1000R front master cylinder clamps neatly to the handlebar and Dunlop Sportsmart TT tyres finish the subtle – yet aggressive – look.

“Fun and stylish, just like doing a wheelie on a BMX bike.”

There’s more than a hint of BMX stunt bike on the Werther machine. The gloss black paint pops eyeballs, as do black forks, gold engine cases and wheels. And not to forget the whitewall tyres. For a bike built to perform, a shorter final drive gear ratio (plus black/gold chain, naturally) makes for instant acceleration, with a full Akrapovič exhaust system adding to the engine’s performance. An NMB Design seat, adjustable levers and grips, plus Puig gold bar ends and black footrests stand out, while smoked varnish on the front/rear lights and indicators are more subtle details.

“A homage to the spirit of a famous and legendary model – the Honda CB750 Four K0.”

The bike that started it all for the modern era of motorcycling, the four-cylinder CB750 ‘K0’ stunned the world in 1969, and AZ Motos CB650R KarbOne, with its metallic gold paint, pays deep respect to its illustrious forbear. SEB Auto Shop are responsible for the bespoke carbon fibre parts like the rear seat unit and headlight surround; the stunning black rims (with chromed spokes) are supplied by Evo-X Racing and wear Dunlop Mutant tyres. Black Topema epoxy paint covers the engine, handlebars, rear shock and cam cover while all the finishing parts are readily available from the likes of Puig and Chaft.

“In the spirit of vintage flat track and supermotard here is our little gem.”

For Espace Motos, the legend of the CB750 Four lives on in the spirit of the Neo Sports Café family, led by the CB1000R and hugely popular CB650R. To respect the legend they added a raised, flatter brown leather seat and for the paint chose green with gold pinstriping, plus an ‘80s Honda logo. The paint also extends to the headlight surround, front mudguard, rear scoops and spring. Vintage-style bar-end mirrors, black footpegs and scrambler tyres complete the makeover.