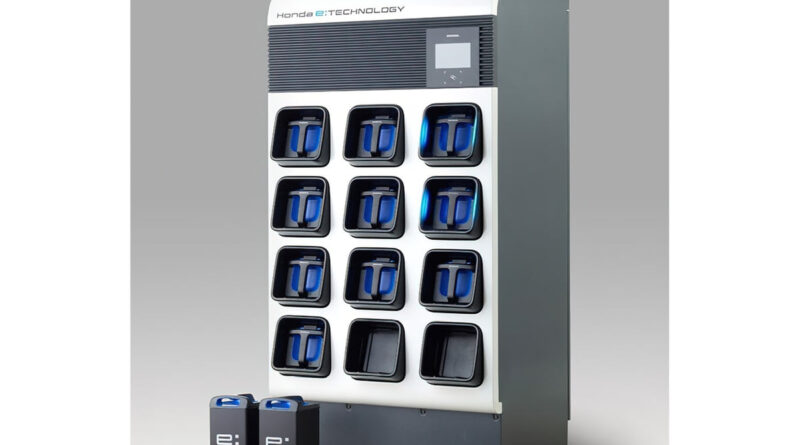 Honda has announced the start of commercialization in Japan of the Honda Power Pack Exchanger e:, an interchangeable battery station, with the first unit delivered to Gachaco Inc., a company created to offer battery sharing services.

With that, Gachaco began operating the first mass production model of the Honda Power Pack Exchanger e: in Japan.

According to the company, users will have access to the MPP e: fully charged when they need it at the city’s battery change stations, which allows for efficient use of electrified mobility products without having to wait for the batteries to be charged.

Developed as a battery infrastructure that can achieve widespread use inside and outside Japan, the Honda Power Pack Exchanger e: features an exterior design that blends in with the urban landscape and adopts the Honda Power Pack Cloud system, which centrally manages cloud, all the information necessary for a battery-sharing service operation.

In addition, Honda sought convenience and ease of use for both the battery-sharing service business and users of electrified mobility products.

It was incorporated on April 1 and, in addition to providing standardized interchangeable battery sharing service for electric motorcycles, it also develops the infrastructure for this service.

In the future, in addition to electric motorcycles, Gachaco will promote the use of standardized interchangeable batteries for other applications, such as storage batteries installed in commercial establishments and private homes.

In addition, spent batteries generated by the sharing service provided by Gachaco will be collected through the battery-as-a-service (BaaS) platform under review at ENEOS for secondary and tertiary use, and finally recycling for cyclical battery use.

Honda also reported that it has started a battery-sharing service in India, carried out with an electric tricycle taxi (also called ‘rickshaws’).

The service consists of the supply of the ‘MPP e:’, a lithium-ion battery capable of storing a large amount of electricity, which can be used in a variety of electrical devices, including small mobility products such as motorcycles, scooters, and tricycles.

A similar service is already offered in several countries by Gogoro, one of the largest and best-known companies in the segment that, in addition to replaceable batteries, also offers its own electric scooters.

MPP stands for ‘Mobile Power Pack’, Honda’s portable and interchangeable battery system, and is one of the company’s initiatives to achieve carbon neutrality in its products and in the corporate activities in which it is involved, by 2050.