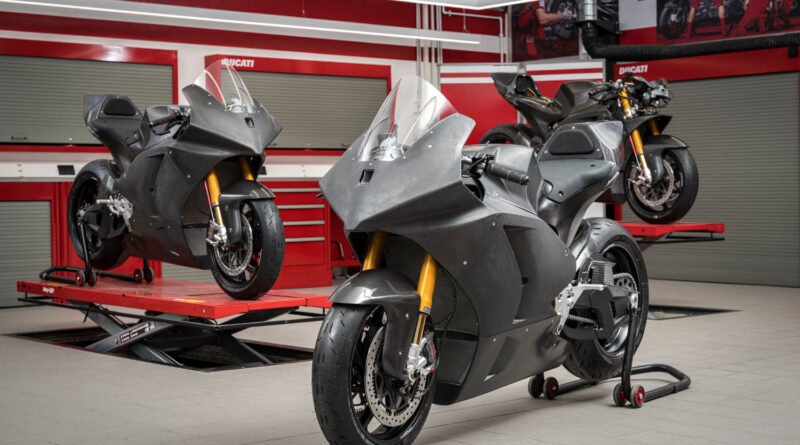 Ducati announced that it has started production of the electric sports motorcycle ‘V21L’, a model that will be used in the 2023 MotoE season, the MotoGP electric motorcycle racing category.

In total, 23 units are being produced, covering the total number of bikes that will compete in the races (18 units), plus 5 spare units, and all of them will be available in mid-February, allowing time for two pre-season tests before the debut at the French GP on May 13.

According to the company, this project was born with the aim of developing competences for its future, maintaining the approach that has always nurtured Ducati’s DNA: experimenting with technological solutions in the world of racing and working so that everything that is developed in this area can later to be used in motorcycles destined for enthusiasts around the world. For them, the most technological, refined and sophisticated electric motorcycle in the world was created, the result of the joint work of Ducati R&D engineers and the Ducati Corse team.

Claudio Domenicali, CEO Ducati:  “The start of production of the Ducati MotoE is a historic moment for our company, which with this project is thoroughly studying the technologies of the future for the world of motorcycling. It is an important area of experimentation, in which we are investing to build know-how, so that we will be ready when battery technology should allow the creation of an exciting electric road bike with the weight, performance and range that enthusiasts expect from a Ducati. We are therefore embarking on this new adventure with the aim of developing the people and skills within the company to shape what the character of a future Ducati electric road bike might be. The MotoE project represents a decisive step for Ducati to contribute to the reduction of CO2 emissions on the product side, alongside research into synthetic fuels (eFuel) that can reduce the total CO2 emissions of internal combustion engines to zero. Environmental sustainability is something that all individuals and all companies must consider a priority if the delicate balance of the planet is to be preserved. Ducati is committed to this also at industrial level, and the construction of the new Finitura e Delibera Estetica area classified as Nearly Zero Energy Building is just the latest example”.

How is Ducati’s electric motorcycle for MotoE

Called the ‘V21L’ prototype, Ducati’s electric motorcycle involved several professionals from the company, from designers to engineers, to end up with a total weight of 225 kg. That’s 12 kg less than the minimum requirements imposed by Dorna and FIM for MotoE.

The battery is huge and uses practically the entire central part of the bike. It consists of 1,152 cylindrical cells of the ‘21700’ type, weighs 110 kg and offers a capacity of 18 kWh with a 20 kW charging socket integrated into the tail. The battery’s carbon fiber housing also acts as a stressed part of the chassis.

In addition, the 5 kg inverter is a unit derived from a high-performance model used in motorsport for electric vehicles.

The engine, on the other hand, weighs 21 kg, has a maximum rotation of 18,000 rpm, and was developed by a partner following the technical specifications provided by Ducati.

According to the company, the entire system is based on a voltage of 800V (with a fully charged battery) to maximize engine power and, as a result, performance and range.

The Ducati ‘V21L’ features an Öhlins NPX 25/30 pressurized inverted fork at the front, derived from the Superleggera V4, and an adjustable Öhlins TTX36 shock absorber at the rear.

Finally, the brake system is supplied by Brembo and is dimensioned to the specific requirements of Ducati MotoE. At the front it consists of a double steel disc with a diameter of 338.5 mm, and at the rear a single disc of 220 mm.

Anyway, we cannot say that the electric world is totally new for Ducati, since the Bologna factory has a line of high-performance electric bicycles. But now with an electric racing bike, the brand paves the way for a production bike in the future.