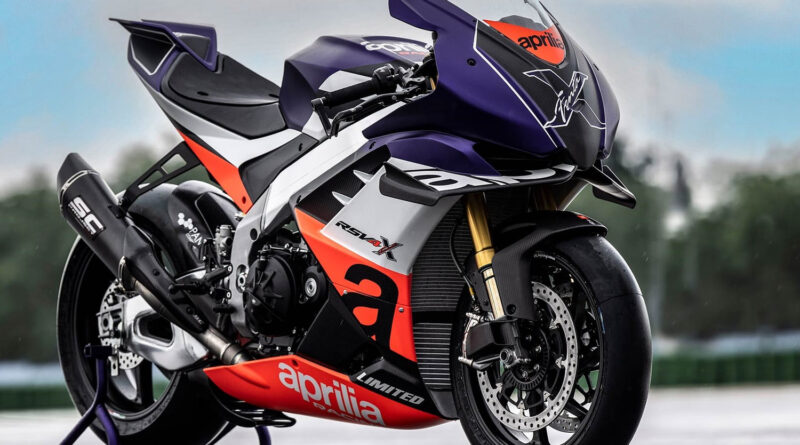 Aprilia has launched the RSV4 XTrenta in Europe, its most extreme supersport bike, which comes with MotoGP technology and aerodynamic wings at the front, rear and under the engine.

According to the company, the RSV4 XTrenta is the first motorcycle in the world equipped with wings at the rear and under the engine, the latter very similar to the one used on Aprilia Racing’s RS-GP motorcycle in MotoGP and made to cool the rear tire and also to increase the aerodynamic load.

The Aprilia RSV4 XTrenta is an absolutely unique creation that celebrates the 30th anniversary of Aprilia’s first world title, and it was made for few, as only 100 unique and numbered units will be produced.

In addition, the livery of the new bike represents a contemporary interpretation of the 1992 Aprilia in the 125cc MotoGP class, on the occasion of the first of 54 world titles for the Noale brand.

Exploring technologies never before so close to those used in MotoGP in terms of materials, components, electronics and, above all, aerodynamics, the RSV4 XTrenta arrives to separate the men from the boys.

According to the Noale factory, never before has a motorcycle on sale to the public boast such a refined aerodynamic study. All parts of the carbon fairing are made by PAN Compositi using the same processes used in MotoGP and incorporate both the newly designed front wings, able to guarantee more load and at the same time less drag, as well as the new rear wings.

But that’s not all: the RSV4 XTrenta is the world’s first bike to mount the ‘lower wing’ on the swingarm (almost under the engine). According to Aprilia, the results of the new setup speak for themselves: downforce is increased by 25%, while drag is reduced by 4%.

The new RSV4 XTrenta uses the basis of the 2022 RSV4 Factory, but has received improvements in all areas, starting with the engine, which now delivers 230 HP of maximum power.

On the chassis side, it has been refined with the Ohlins suspension modified by Andreani in collaboration with Aprilia MotoGP engineers. The braking system is the highest available on the market, from the Brembo brand, consisting of GP4-MS monoblock calipers and 330mm T-drive discs at the front.

Finally, the Marchesini M7R GENESI magnesium wheels weigh about 2 kg less than the standard wheels, and are fitted with slick Pirelli Diablo SBK tires in sizes 120/70-17 at the front and 200/65-17 at the rear.

The Aprilia RSV4 XTrenta will be available to book online from September 6, and is being offered in Europe for €50,000.

Lucky buyers will also have the opportunity to pick up their model at Aprilia Racing, with an exclusive visit to Noale’s racing department at the same time, and will receive not only the limited and numbered version of the RSV4, but also the dedicated cover and mat.