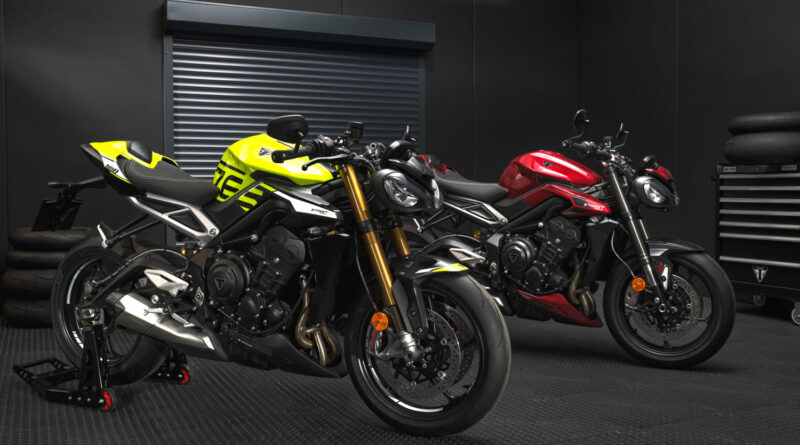 Triumph has launched in Europe the 2023 model of the Street Triple R and Street Triple RS, its 765cc triple engine ‘naked’ sport bikes, which arrive with more power and new technologies to dominate on the streets and on the track.

In addition, a limited and exclusive version was launched, the Street Triple 765 Moto2 Edition, which has the highest specification of the line and will have only 765 units produced in each of the two available color options.

One of the main improvements in the new model was the increase in power of the triple engine. Now, the 2023 Street Triple R has up to 120 hp of maximum power. The Street Triple RS and Street Triple 765 Moto2 Edition extract up to 130 hp from the high-tech unit. All versions also have a higher torque, up to 80 Nm (8.1 kgfm).

Finally, the models gained new technologies and visual updates, including new colors and graphics, and even carbon fiber fairings, on the 765 Moto2 Edition.

The entire 2023 Street Triple line has gained a more aggressive look that conveys a lot of sportiness with new sharp lines and defined angles. It has dual LED headlights, as well as LED daytime running lights, creating an intimidating look (with a distinctive shape on the RS and Moto2 Edition).

The 2023 model features a new 15-litre fuel tank that has integrated side panels and an angled design that aligns with the radiator fairings, finished off by a new headlight finish that also incorporates an air intake.

In addition, the new bikes feature a new muffler shape that adds to the Street Triple’s aggressive stance, as well as accentuating the typical Triumph triple engine sound.

In addition, all models feature a 6-speed gearbox with Triumph’s Quick Shift Assist (quickshifter) up and down, and slipper clutch.

Finally, in addition to the latest generation of quickshifter, the 2023 Street Triple has an assist and slip clutch and front wheel lift control (wheelie control).