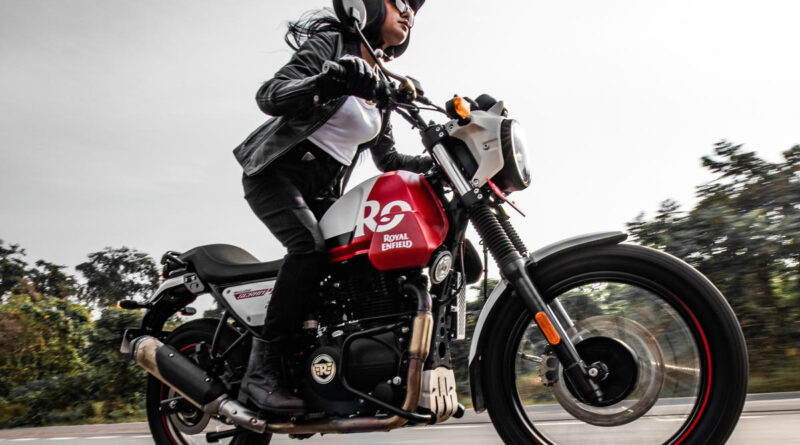 Royal Enfield has launched in India the new 2023 Scram 411, its Himalayan-based 411cc adventurous crossover motorcycle, which arrives with retro Scrambler design and new ergonomics to make it fit for urban use and comfortable for hours on the road.

As it is based on the Himalayan, the new Scram 411 has great off-road capability, but it gets a 19″ wheel at the front for better urban use, still, it easily faces speed bumps, ditches and asphalt holes.

According to the company, the Scram 411 is a new subspecies that has the authentic vibes of a scrambler and comes with strong adventure DNA built in.

The main differences to the Himalayan is that the model has a one-piece scrambler seat, and a small fairing around the headlight and on the sides of the fuel tank. The Himalayan, on the other hand, has a small and higher fender at the front and a windshield, items not available on the Scram 411.

The Harris Performance chassis is completed with 19″ / 17″ spoked wheels, disc brakes on both axles with dual-channel ABS, dual purpose tires and 41mm telescopic front suspension forks with 190mm of travel.

In addition, it has a ground clearance of 200mm and the seat height is 795mm. The fuel tank has a capacity of 15 liters and the kerb weight of the bike, without fuel, is 185 kg.

Finally, the instrument panel is complete, with analog and digital LCD displays, highlighting the GPS Tripper navigation system, which is optional.

Anyway, the 2023 Royal Enfield Scram 411 is now available in India for from INR 2,03,085 (US$ 2,675). It will be available in Europe and Asia Pacific countries mid-year and will later officially roll out in North America and Latin American countries.