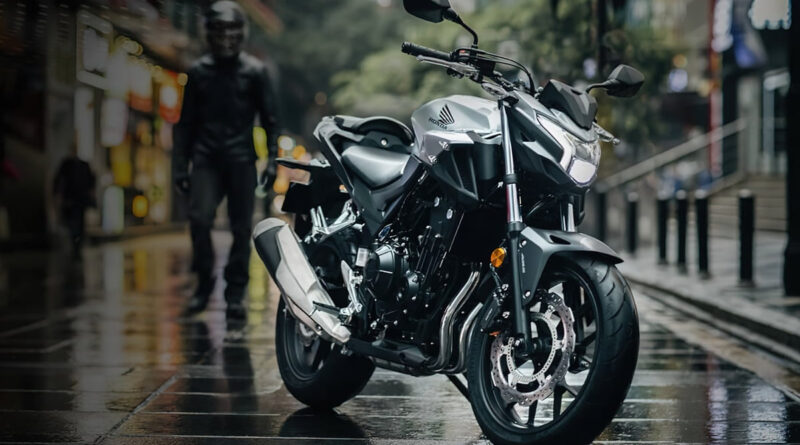 Honda presented in China the 2022 model of the CB 400F, its 399cc ‘naked’ two-cylinder motorcycle, which arrives with new colors and graphics, but which maintains the same mechanical set as the previous model.

Based on the well-known CB 500F, the CB 400F is a version for the Chinese market with some slight differences in design and, of course, mainly in the engine.

In terms of design, the main changes compared to the CB 500F are: different front optics, LED taillight with another shape, LED blinkers from the CB 190F model and traditional front suspension (it is not Upside Down).

The engine is the same used in some markets, such as Japan, but with a smaller cubic capacity than the CB 500F model. It is a 399 cm³ twin-cylinder with liquid cooling, capable of generating up to 33 kW (45 hp) of maximum power and 37 Nm / 3.8 kgfm of torque.

How is the CB 500F sold in Europe and North America

The biggest innovation in the 2022 CB 500F is the 41mm Showa SFF-BP (Separate Function Fork Big Piston) inverted front fork, which allows an improved handling, and is the same used in the CB 650R.

The model also has a new, lighter, redesigned rear swingarm. Constructed of 2mm steel, it employs a hollow crosshead and is more rigid in rotation and also more flexible laterally to improve handling.

Braking performance has also been improved, with the adoption of 296 mm dual disc brakes and radially mounted Nissin two-piston calipers.

Finally, the 17″ aluminum alloy wheels are new and lighter, with a new design. They are fitted with tires measuring 120/70-17 at the front and 160/60-17 at the rear. The front fender was redesigned and is smaller, in addition to coming out in black.

The engine is the same 471 cm³ twin-cylinder with liquid cooling, but it received injection adjustments and the new settings improved the torque sensation without compromising performance. It is capable of generating (in Europe) up to 35 kW (47 HP) of maximum power and 43 Nm / 4.55 kgfm of torque.

Also in terms of mechanics, the gearshift has 6 speeds and is equipped with an assist and slip clutch. The fuel tank capacity is 17.1 liters.

In addition, the instrument panel is fully digital in LCD and has a gear indicator, in addition to the usual partial and total odometers, speed and tachometer indicators.

There is also support for GPS and tapered handlebars, which conveys more confidence during the ride and has better resistance. The lighting is all in LED, and the headlight and turn signals were given a stronger illumination.