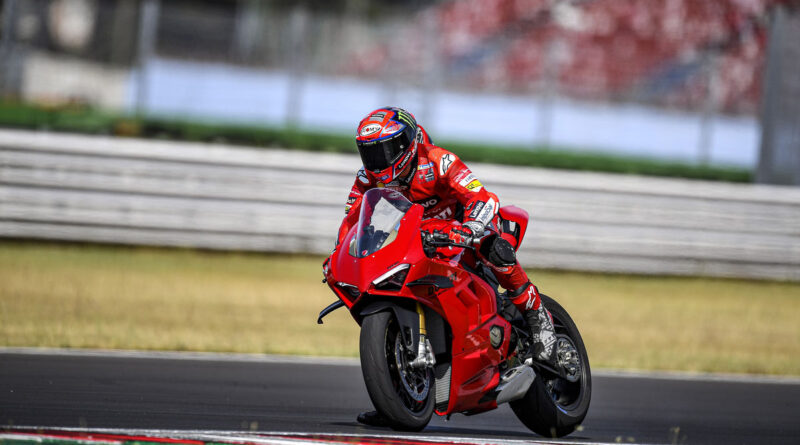 Ducati launched in Europe the new 2022 Panigale V4, its 1103cc sports bike, which arrives with a more powerful engine and improvements in aerodynamics, ergonomics, chassis and electronics.

According to the brand, with version 2022, the Panigale V4 project completes the most significant evolution since its birth, with improvements involving all areas. The result is a bike that is even faster on the track and at the same time more intuitive and less tiring for a wide range of riders.

The 2022 Panigale V4 S, for example, was around 1 second faster than the previous model, on the track in Vallelunga, Italy, with two amateur test riders. With Ducati professional test rider Michele Pirro, the new model was 0.5 seconds faster on the same track.

To achieve this, the Bologna based factory says it has worked intensively on aerodynamics, with engineers actually concentrating their hard work on the fairing, which now integrates thinner and more compact dual-profile design wings with greater efficiency.

In addition, a lot of work has also been done on ergonomics, with the aim of improving control of the bike during track sessions and allowing the rider to get the most out of his performance. There are seat improvements and the fuel tank is reshaped in the rear to allow the rider to dock better when braking.

The engine of the 2022 Panigale V4 is the 1,103cc Desmosedici Stradale derived from MotoGP, which has gained several updates and has become more powerful, as well as being EURO5 compliant.

The new engine has been updated in the lubrication circuit and is coupled to a new oil pump that reduces power absorption. The increase in the diameter of the muffler outlets allows to reduce the back pressure of the exhaust and, consequently, to increase the engine’s performance.

In addition, the gearbox is also new, with an extended ratio for first, second and sixth gears. It is a gear ratio from the WorldSBK Championship, in other words, more suitable for use on track.

The 2022 Panigale V4 is equipped with state-of-the-art electronics package based on the use of a 6-axis inertial platform. In addition, it has an improved instrument panel, which features a new distribution of external light functions.

Both versions (V4 and V4 S) will be available in Europe and North America from December 2021 in the classic “Ducati Red” color.