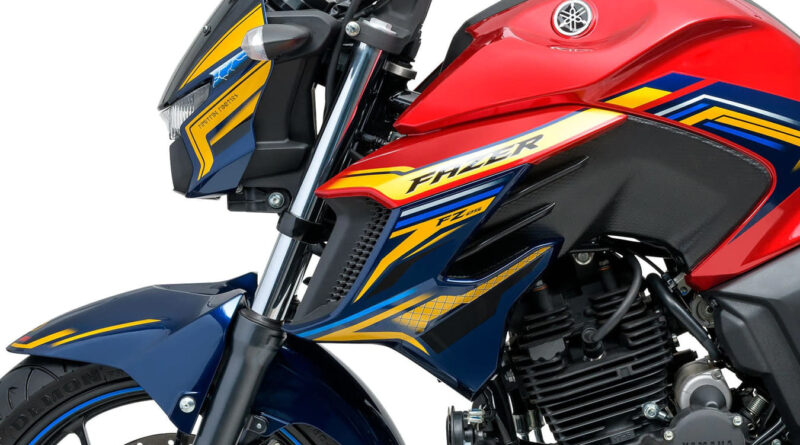 Yamaha has launched the 2023 Fazer FZ25 Thor in Brazil, its 250cc ‘naked’ motorcycle, which arrives with exclusive graphics, the result of a partnership with Marvel.

This is the sixth special and exclusive edition from Yamaha Brazil with a Marvel theme, which has already had XTZ 250 Lander Captain America, FZ25 Black Panther and Captain Marvel, MT-03 Iron Man and NMax 160 Spider-Man.

The Yamaha Fazer FZ25 Thor features graphics inspired by the armor of Marvel’s hero, the God of Thunder. It has inscriptions whose signs in Asgardian kings and runes, located on the fairing of the headlight, means “Limited Edition”.

In addition, it features Yamaha and Marvel logos on the sides next to the seat, and the iconic Hammer of Thor, called ‘Mjonir’, on the front fender. This special edition is complemented by blue stripes on the edges of the wheels.

According to the company, it has a forged aluminum piston and ceramic coated cylinder, providing durability and economy.

The gearbox is 5-speed and the final drive is by chain. The clutch is the traditional wet Multi-Disc, bathed in the same engine oil.

The Fazer FZ25 has an ABS system on both wheels, which prevents the wheels from locking up in sudden braking or on slippery floors.

In addition, it has a Blueflex engine, which allows the use of Ethanol and/or Gasoline, in any proportion, making it easier to choose the cheapest fuel when refueling.

Finally, it has LED lighting (headlights and flashlights), and a digital LCD panel, with tachometer, speedometer, odometer and fuel level.

The 2023 Yamaha Fazer FZ25 Thor is a special edition for those who want to attract attention wherever they go, but charge BRL 500 more than the standard version.

Since only 1000 units will be produced, if you don’t get one, you can count on a collection of Yamaha/Marvel clothing and accessories, which was developed and produced by the Brazilian brand Piticas, a brand that is also a Disney partner.

Anyway, for more information and see all the exclusive models, visit the Yamaha Motor Brasil website at https://www3.yamaha-motor.com.br/.