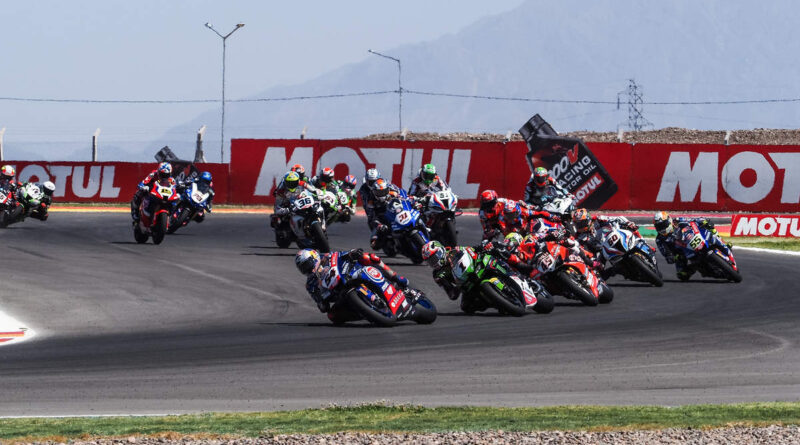 Toprak Razgatlioglu (Yamaha) dominated the weekend in San Juan, Argentina, for the WorldSBK Championship. The title challenger won race 1 on Saturday and the Superpole race on Sunday. In race 2, he finished third and, with that, he put a hand to the title, as there is now only one round left.

Race 2 was won by Scott Redding (Ducati), in a thrilling contest between him, Toprak and Jonathan Rea (Kawasaki). The two races that Toprak won were very smooth, even monotonous. He found no difficulties and won very easily.

In the main race on Sunday, the Turk could not repeat his good performance and had to fight a lot, but ended up crossing in third position. He started from pole, but early on, he was under a lot of pressure from both Rea and Redding.

The dispute was intense between the trio, for more than half of the race, with many exchanges of positions between them. But, as soon as Redding took the lead, he started to open up as he was at a better pace than his opponents. The Ducati rider maybe had the pace to try for victory in race 1, but he crashed right at the first corner and had to make a recovery race.

Rea, on the other hand, suffered a lot to overtake Toprak. He didn’t have the necessary speed to try on the straights and, when braking, he had to brake before the Turk. In one of the corners, he had no option, he had to try. He put it on the inside at turn 1 and managed to make it ahead of the Yamaha rider. But he wasn’t free yet. He had to defend bravely in the next corners to finally open up an advantage.

In the final laps, Toprak accepted the third position, as he saw that he was no longer able to try to take second place and, much less the victory, as Redding opened up enough advantage to guarantee another victory for the Bologna team.

Therefore, with the result of the weekend in Argentina, the fight for the title is for the last round, in Indonesia. Toprak, with the good result achieved, managed to increase the advantage to Rea. Now, the Kawasaki rider is 30 points behind the Turkish.

Finally, WorldSBK returns from November 19th to 21st, with the Indonesian round, on the new Mandalika International Street Circuit (which in 2022 will also host MotoGP).