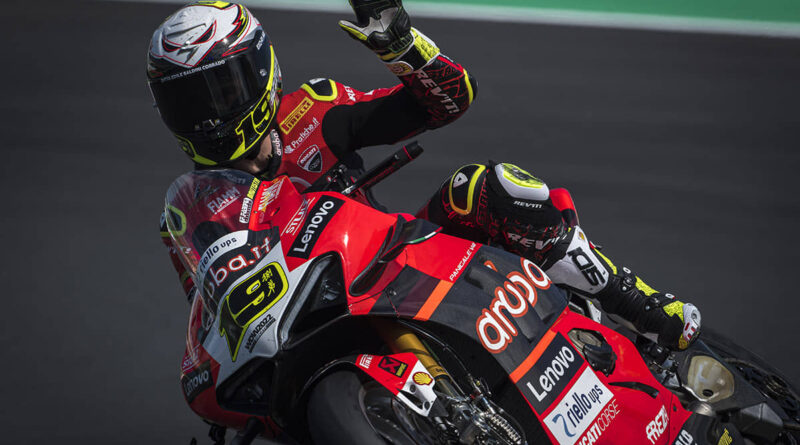 Ducati rider Alvaro Bautista won race 2 this Sunday at the Misano circuit, in Italy, for the WorldSBK Championship, and opened up a good lead in the championship.

The Spaniard dominated the weekend at the Emilia-Romagna round with victory in race 1 on Saturday and second place in the Superpole race. It was a great result for the team, as this round was ‘at Ducati’s house’. Big names in world motorcycling were present as spectators, among them former MotoGP rider Valentino Rossi, current official Ducati MotoGP rider Francesco Bagnaia, three riders from Ducati’s satellite MotoGP teams, Fabio Di Giannantonio, Marco Bezzecchi and Luca Marini, and former MotoGP and WorldSBK rider Max Biaggi.

On Saturday, Toprak Razgatlioglu (Yamaha) had a technical problem when he was in third position and retired, not scoring any points. Second place was taken by Jonathan Rea (Kawasaki). Bautista was dominant, fighting for the lead of the race only in the first few laps. When he finally managed to overtake (in the famous ‘Curvone’, the fastest corner on the track), he rode calmly until the final checkered flag.

On Sunday, the result for the Ducati rider was practically the same. In the first few laps, he had to fight for position with Toprak, who had a good pace but showed he was at the limit. Bautista again made the pass on the ‘Curvone’ and, after a few changes of positions, he finally took the lead and started to open up.

The Yamaha rider could do nothing more and had to settle for second place. In an interview after the race, he said he ‘tried everything’, he tried to win, but with the heat and speed of Bautista, there was nothing he could do.

He left reasonably happy with second place as his other competitor, Jonathan Rea, finished only in fourth place. So, despite losing points to Bautista, he took points from Rea, one of his main opponents for the title. Who ‘helped’ Toprak was Michael Ruben Rinaldi (Ducati), who started from tenth position in Race 2 to overtake the six-time champion and finish third. It was his second podium finish of the weekend as, on Saturday, he also finished in third position.

Therefore, with the result of the weekend in Misano, Bautista is the leader with 220 points, Rea the second with 184 and Toprak the third with 141 points.

Finally, the WorldSBK returns from the 15th to the 17th of July, with the UK round.