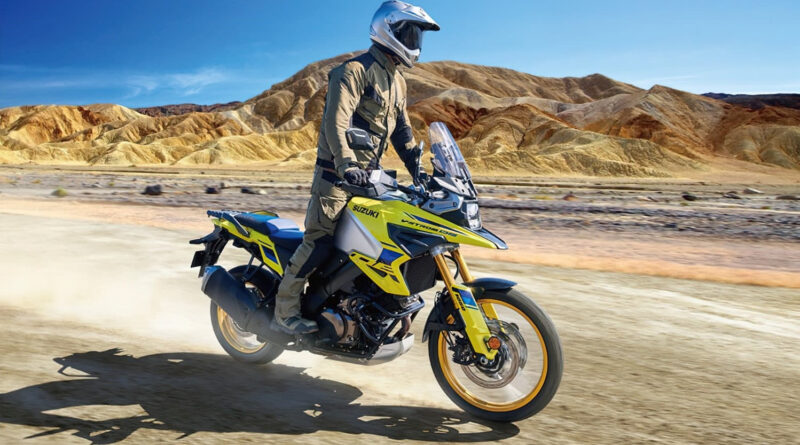 For anyone who is a Suzuki fan and needed a bike for any type of terrain, was disappointed. Despite the brand having Bigtrails motorcycles capable of leaving the asphalt, the models were more suitable for traveling on tarmac pavements.

But that all changed with the launch of the 2023 V-Strom 1050DE, an extreme adventurer bike that can handle off-road effortlessly, as opposed to the ‘standard’ V-Strom 1050, which is more focused on touring and occasional light off-road trips.

The main differences to the V-Strom 1050 are the bigger front wheel (21″) and the higher suspension, which together make it easier to negotiate obstacles. In addition, the V-Strom 1050DE has spoked wheels, unlike the standard model, which has aluminum alloy wheels.

But that’s not all that makes this new bike much more suitable for off-road. The Suzuki V-Strom 1050DE introduces a new package of features specifically aimed at maximizing performance and control on gravel and dirt roads, as a 40mm longer wheelbase, 25mm higher ground clearance and 20mm wider handlebars on each side.

Also, as mentioned, it is equipped with spoked wheels and aluminum rims (21 inches at the front), longer rear swingarm, and longer-travel suspension, with 170 mm of travel at the front and 168 mm at the rear.

Finally, the new bike adopts G (Gravel) mode in the traction control system and ABS which can be turned off at the rear wheel. Also new to the model is the 5-inch color TFT instrument panel, which provides the rider with information from the latest electronic controls.

Anyway, for those who expected a more robust model from the Japanese brand, this is the bike. The new 2023 Suzuki V-Strom 1050DE is expected to hit stores in Europe and North America in early 2023. For now, prices have not yet been released.