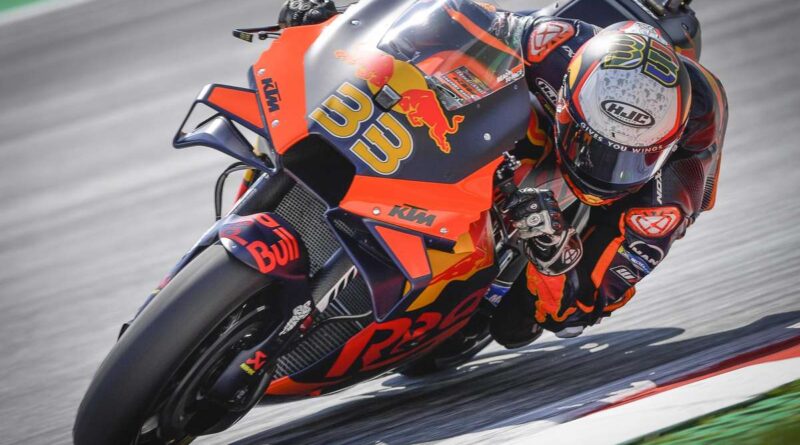 Brad Binder, Red Bull KTM Factory Racing rider in MotoGP, went all in on the Spielberg race and won the Austrian GP this Sunday. The South African decided not to stop to put on wet tires when it started to rain and managed to cross the line first.

It was a very risky bet for the KTM driver, as the track was very wet and made life very difficult for those who had slick tyres.

Before the rain, the dispute for the leadership of the race was very close, between Francesco Bagnaia (Ducati Lenovo Team), Marc Marquez (Repsol Honda Team) and Fabio Quartararo (Monster Energy Yamaha MotoGP).

Marquez pressed the leader a lot until he managed to take the lead when the first drops of rain began to fall. There were only 6 laps to go. They managed to stay on the track for two more laps, but with 4 laps to go, the Honda rider, who was in the lead, waved that he would go in to change bikes and come out with wet tires.

Almost everyone who was with him also decided to join, except Brad Binder, who decided to take a risk and see what would turn out.

On the last lap, Binder was practically unable to ride, he was slipping and almost had no brakes. But his advantage over the others was still big and he managed to cross the finish line first. Big party for the Red Bull KTM team with the victory at home.

Marquez, after returning on wet tyres, slipped at turn 1 and crashed (nothing big). He managed to get back on the bike, but finished the race only in 15th position.

Bagnaia and Jorge Martin (Pramac Racing Ducati) managed to regain their positions, as with the ideal tires for the conditions, they did not find it difficult to overtake several riders on the last lap, but were unable to catch the leader.

Just to illustrate, Valentino Rossi (Petronas Yamaha SRT) occupied third place on the last lap, also on slick tires, and was hoping for his #200 podium in his career. But he didn’t, he ended up being overtaken and finished the race in the (good) 8th position.

Another who saw his chance of a podium escape was Aleix Espargaro (Aprilia Racing Team Gresini), who occupied second position on the final lap. In just a few corners, he was passed by several riders and finished only tenth.

It was, in fact, a crazy race, but one that showed an evolution of Honda and Marc Marquez, and that consolidated Jorge Martin as a rising rider with his second consecutive podium.

Anyway, Quartararo leaves Austria in the lead of the championship, with 181 points, 47 points more than the runner-up, Francesco Bagnaia, who has 134 points.

See the race result in Austria:

MotoGP returns on the 29th of August with the British GP at the Silverstone Circuit.