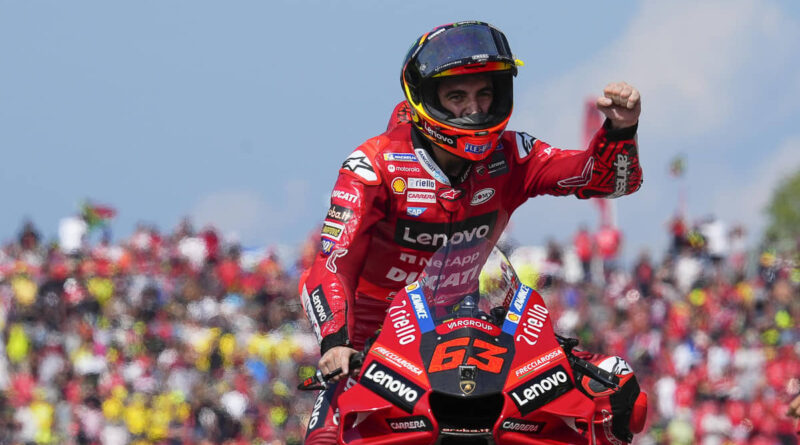 Francesco Bagnaia, a Ducati Lenovo Team MotoGP rider, won the San Marino GP this Sunday in an electrifying race from start to finish, and made history as he became the first Ducati rider to win four races in a row.

With this result, the Italian entered the fight for the title once and for all, and took the second place in the championship. He is now just 30 points behind the leader, with 150 points still up for grabs.

Bagnaia had an impeccable race, as he started from fifth position and, right from the start, was third, behind Enea Bastianini (Gresini Racing MotoGP) and leader Jack Miller (Ducati Lenovo Team).

After a few laps, Miller ended up crashing and had to retire. With that, Bastianini took the lead, but was under intense pressure from the Ducati rider.

It didn’t take long and Bagnaia managed to overtake and lead the race. From there, he didn’t lose more, but he couldn’t open, as his opponents were too fast.

Who took advantage of this situation was Maverick Viñales (Aprilia Racing), who managed to overtake Bastianini and put a lot of pressure on Bagnaia. He tried everything, but he couldn’t overtake because the Ducati was too fast, especially on the straights. There were several laps applying that pressure, but Bagnaia didn’t make a mistake.

With that, Viñales started to move away and became the target for Bastianini, who showed to be much faster. It didn’t take long for the Italian from Gresini to take second place and go hunting for Bagnaia.

In the last few laps, Bastianini was much faster, but he couldn’t overtake either. He tried to go out of the last corner with more speed and overtake over the finish line, but it didn’t work, Bagnaia crossed ahead, with a difference of just 0.034s.

Great race in Misano and historic result for Ducati, which saw Bagnaia be the first rider of the brand to achieve four consecutive victories.

A very good result also for Viñales who achieved another podium and sees victory very close. He said he was able to see, during the race, where the bike needs to improve so that this victory can finally happen.

Luca Marini (Mooney VR46 Racing Team) was another rider on a Ducati bike who achieved a great result and an amazing performance, especially in the first part of the race. In the end, he was losing performance, but managed to finish fourth, ‘holding’ the current leader Fábio Quartararo (Monster Energy Yamaha MotoGP).

Fifth place wasn’t too bad for Quartararo, as he managed to finish ahead of Aleix Espargaro (Aprilia Racing), one of his rivals in contention for the title.

Anyway, the race was very electrifying, from start to finish, and we could see Bagnaia take the runner-up and make history with his fourth consecutive victory.

Now the MotoGP circus takes a week off and returns in mid-September. Next stop: Aragon GP.

See the Championship standings after the race in Misano:

MotoGP returns on September 18, with the Aragon GP, at the MotorLand Aragón circuit.