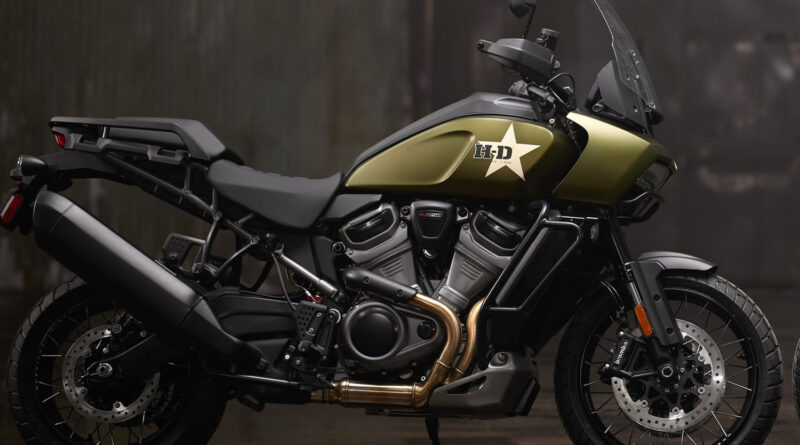 Harley-Davidson has launched in the US a special version of its adventurous ‘BigTrail’ Pan America 1250, which arrives with military colors and graphics in limited quantities.

The Pan America 1250 Special G.I. (Enthusiast Collection) is draped in Mineral Green Denim Deluxe paint, an all-new color created specifically for this collection and complemented with military-inspired graphics. The GI Enthusiast Collection is only available as factory installed for the Pan America 1250 Special and Tri Glide Ultra models for the US market.

“The new Mineral Green Denim Deluxe paint pays homage to the Olive Drab paint used on Harley-Davidson WLA models,” said Brad Richards, Harley-Davidson Vice President of Design. “This color features a metallic effect resulting in a subtle gold highlight, allowing the color travel to be more dramatic and show off the shape of the surfacing.

“The tank graphic celebrates the iconic white five-point star, which was used during WWII on military vehicles,” adds Richards. “The tank graphic also features a stenciled ‘H-D’ and a location of Milwaukee, Wisconsin abbreviated, inspired from the spec tags found on government-issued military equipment. The stenciled approach is a treatment often found on military vehicles as lettering was frequently done in the field. Here we’re calling out the birthplace of the Harley-Davidson Motor Company and the original WLA model.”

The Pan America 1250 Special G.I. has the same mechanical set as the standard version, without any changes. It will retail for US$20,799 in the US.

The Harley-Davidson Pan America 1250 has a unique design, especially on the front, with an LED headlight in a horizontal position. The front turn signals are located further down, inside the side fairings, and give the impression of auxiliary headlights.

The gearbox is 6-speed, the fuel tank capacity is 21 liters and the dry weight is 228 kg.

In terms of technology, the Pan America 1250 has 5 riding modes (Sport, Road, Rain, Off-Road and Off-Road Plus), plus a customizable one, which allows you to regulate power delivery, engine braking, cornering ABS. and cornering traction control. In addition, the ‘Special’ version has Showa BFF semi-active suspension at the front and Showa BFRC at the rear.

Finally, the instrument panel is fully digital in 6.8-inch color TFT, with smartphone connection via Bluetooth. There is even a USB-C socket.

Anyway, Harley-Davidson says this new Enthusiast Collection will have a different design released annually to celebrate the unique origins and special interests of riders in the Harley-Davidson community.